A South African woman allegedly wired her mouth shut with “slimming wires” in a desperate attempt to lose weight for a breast reduction surgery.

Aviwe Mazosiwe has been trying to lose weight and reach a certain BMI to qualify for breast reduction surgery that she hopes will improve her quality of life. She had managed to lose 12 kilograms with intermittent fasting, but after reaching a plateau on her weight-loss journey, the South African woman decided to take more drastic measures. In June of this year, she had slimming wires fitted on her teeth. These are orthodontic brackets with wires wrapped through them that are attached to the wearer’s teeth to keep the jaw shut. It’s a controversial weight loss device that has attracted a lot of criticism online after Aviwe started sharing her experience on TikTok. 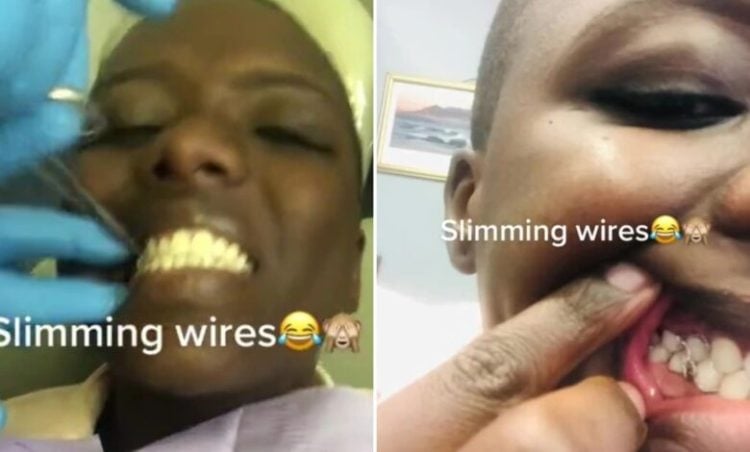 “I had so many negative comments but I can’t remember them all because I tried my best not to focus on those,” Aviwe told British tabloid The Sun.

“I was still very new to the app itself when I started sharing my journey and the negative comments made me want to shut down the whole thing,” Mazosiwe added. “But I decided to keep going because it somehow felt like something I needed to share. Besides, the good comments made up for all the negativity.”

Aviwe had the slimming wires installed at the end of June and kept them on for 7 weeks, during which time she lost a whopping 14.3 kilograms (31.5 lbs). Because her jaw was wired shut, she relied on liquid foods like smoothies, soups, and yogurt for sustenance, and claims that the savory taste of the soups kept her cravings in check.

After having the slimming wires removed, the woman did indulge in one guilty pleasure, a jalapeño burger from her favorite place, but she did have to wait a day, because her jaw muscles needed time to adjust after seven weeks of being stuck in the same position.

“I get that it’s a bit extreme but it really helped me as I struggled with self-discipline and sticking to ‘clean eating’ over a long period,” Aviwe Mazosiwe explained, adding that she understands slimming wires aren’t for everyone.

“Only do this when you’re ready and in a good space mentally, especially if you’re an emotional eater,” she added.

These slimming wires reminded us about a very similar and equally controversial weight-loss device we featured last year – the DentalSlim Diet Control. It was designed to allow wearers to open their mouths only about 2mm, thus making them unable to chew while making breathing and speaking possible.

A quick google search reveals that Aviwe’s story is not uncommon. Apparently, slimming wires are very popular in South Africa, and there are hundreds of videos on YouTube by people documenting their experiences.