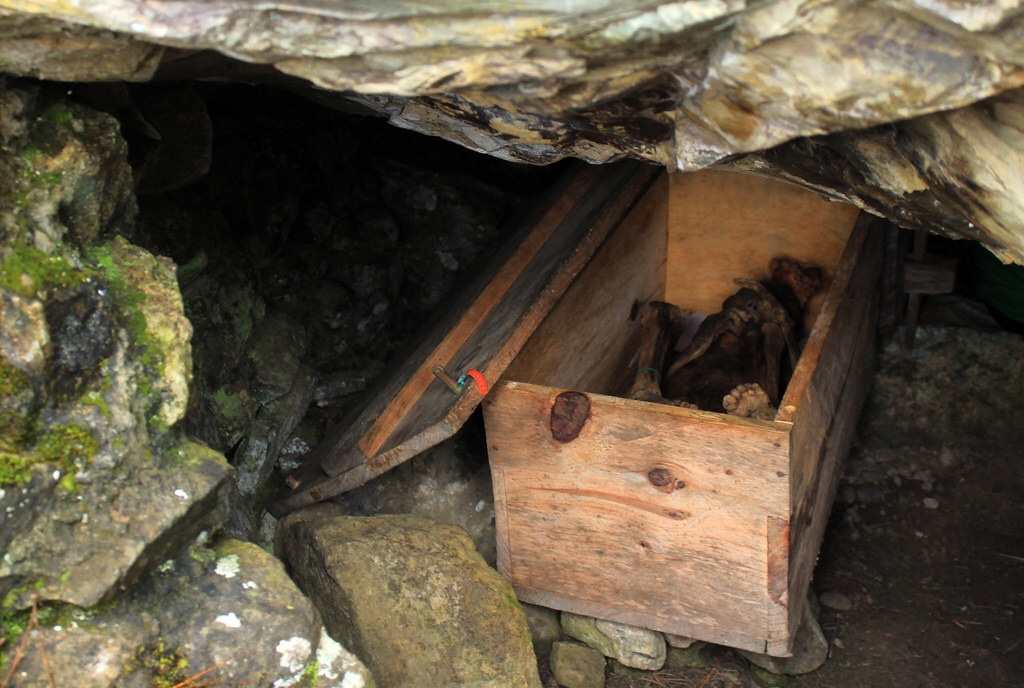 Know by several names including Kabayan Mummies, Ibaloi Mummies or Benguet Mummies, the “Fire Mummies” remain an elusive treat.
Their exact locations are kept unpublicized by the government due to a a series of thefts in the 1900s, and they can be found only after a five hour car ride up the mountains to the villages of Kabayan, then another five hour hike up a dizzying escalation of stone steps.
There the mummies stay in Timbac caves, the third highest peak in Luzon, still comfortable curled in their original coffins. 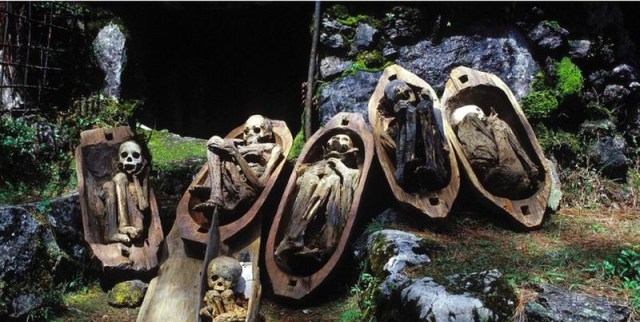 Scientists believe they were first created sometime by the Ibaloi tribe between 1200 and 1500 CE. In the olden days, the tribe mummified there dead by smoking them dry, reason why they are baptized as “fire mummies”. And now The indigenous Ibalois of Benguet, remains custodians of a Burial practice that has been declared National Cultural Treasure.
Unlike their Egyptian equals, the bodies are not gauzed. Instead, they are naked and seated in a fetal position, and some even have noticeable traditional tattoos on their legs.
Basically, when a person dies, a huge amount of salt is mixed with water and poured into the mouth of the corpse, while those dying are asked to drink the salty mixtures.
This is done to preserve the internal organs.
An aromatic rare herb called bisodak is blended with local oil and other organic plants, such as ginger.
The mixed fluid is then rubbed all over the dead body repeatedly, and their mouths were filled with smoke.
After death, the body was washed and set over a fire in a seated position, thus drying its fluids.
It’s estimated that the entire process could take weeks, sometimes months.
The body is then arranged into a fetal position which is believed to bring the person to the afterlife, placed on a death chair, tied on a high spot, and fire and smoke is placed underneath. This method helps the extraction of the body fluid and distracts insects to lay eggs in the mouth or ear.
Interestingly, the baknang (rich) family of the dead must offer sacrifice such as cow, water buffalo or pig to feed the whole community, as it is also a way of attesting their affluence.
To finish, once the cadaver is mummified, it will be buried in the family’s cave of choice – normally in high and cold places to aid in the preservation.
The ritual of lowering the cadaver to its final resting place was invariably accompanied with a racket produced by the beating of bamboo sticks, as this is said to guide the demised spirit to its counterpart in heaven.
A year later, a celebration was tendered to welcome back the soul of the departed.
The practice died out in the 1500s when Spain colonized the Philippines, and the sacred caves remained intact until the 19th century. 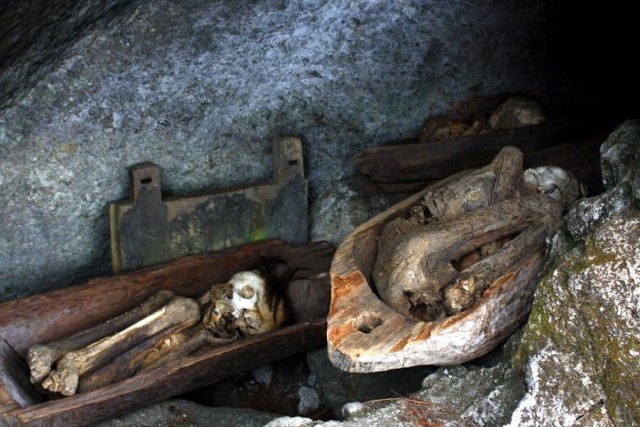 Today, the mummies are left in their natural caves with relatively little security and have been designated as one of the 100 most endangered sites in the world.
Officials know of between 50 and 80 other mummies, but they will not give their locations for fear of vandalism. Locals still pay respects to these exposed mummies with offerings such as gin and chicken dishes, ensuring the dead are well fed and are having a good time in the afterlife.
A small museum in Kabayan also displays a few mummies.
And today, despite the shift in religion, as locals have been christianized, many Ibalois still cling tenaciously to their age-old beliefs. An unmarried male and female, for example, are not allowed to sleep in one room because It is believed that Kabunian (deities) will bring them bad fortune…. 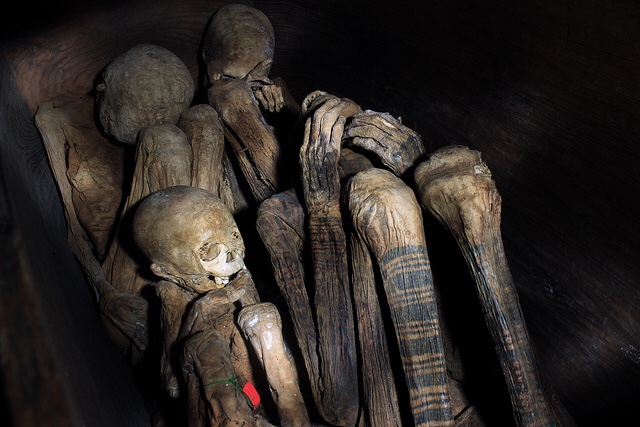 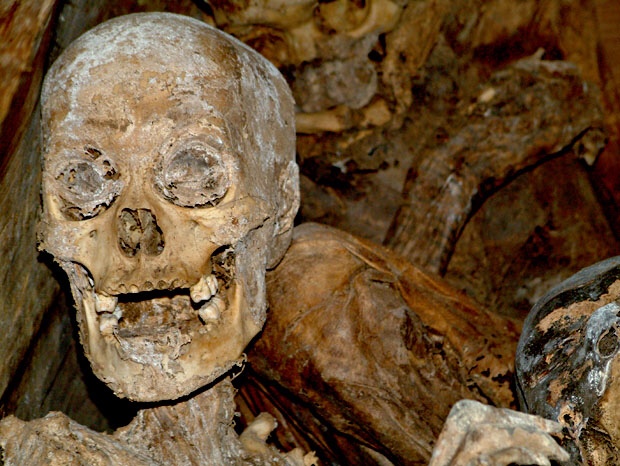 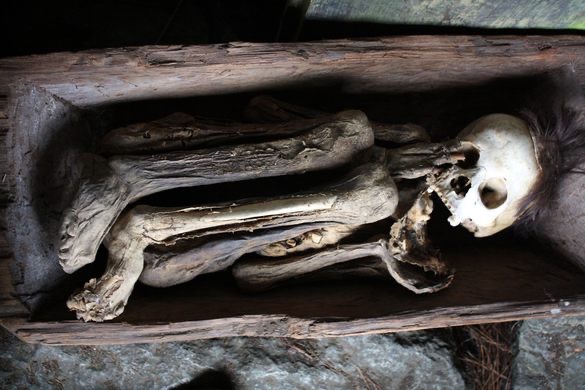 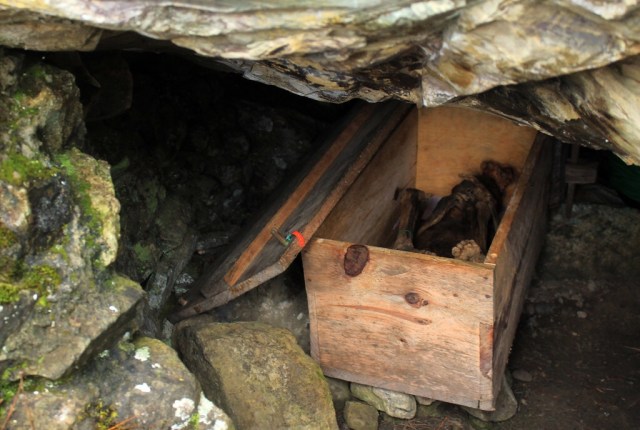