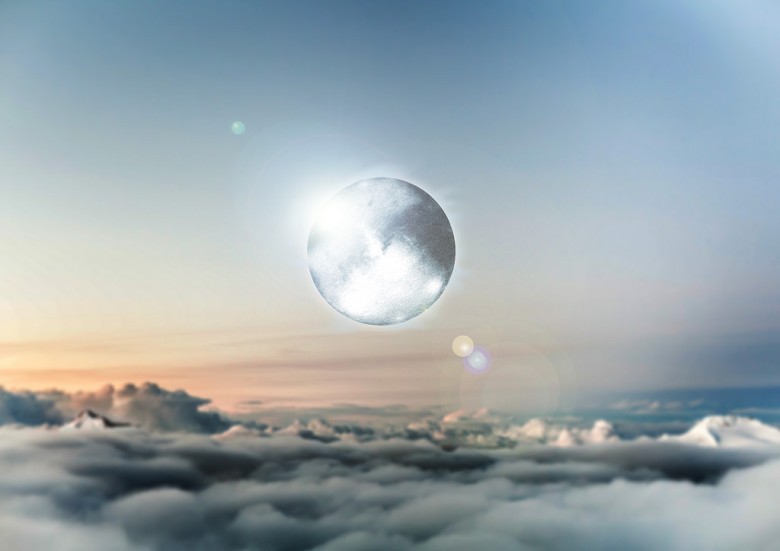 In May 1974, Terry Mathew Betz, a 21-year-old medical student, his mother Gerri, and his father Antonie, a naval engineer, went to inspect the damage to their property caused by a fire that spread across 220 acres of the swamp forest Fort George Island, located east of Jacksonville, Florida.

* On the 26th of the same month, the family found something quite peculiar in the region that had been prey to fire.

* They found a polished metallic sphere approximately 8 inches in diameter (about 20.32 centimeters).

Although it was in an area that had been consumed by fire, the sphere did not show any signs of damage, scratches or the typical dark spots that appear on metals when they are subjected to fire.

Terry and his parents began to suspect that this sphere could be an object owned by NASA, or even part of some Soviet satellite (remember in 1974 the cold war began, and the American people lived in constant paranoia about a possible Soviet attack ). The Betz family came to consider the possibility that this object was the cause of the fire, but as mentioned above, the object did not show signs of having been in contact with high temperatures, since the metal looked strangely shiny. 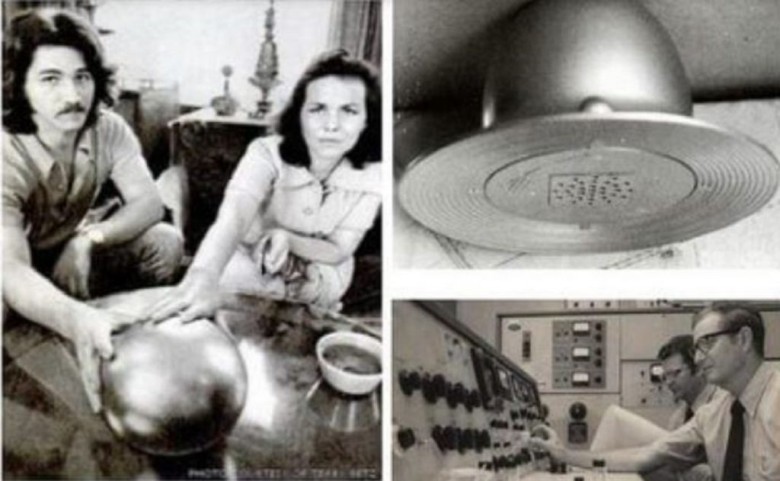 Terry and his parents decided to take the sphere home. The object found its destination in the young student’s room, and he stayed there for about two weeks, until something mysterious happened.

Terry was accompanied by her friend Theresa Fraser doing improvisations with the guitar, a fact that ended up causing some reactions in the strange metallic sphere. The object began to “vibrate” and emit a stabbing sound, in response to the sound emitted by the guitar, whenever specific chords were played.

Days later, members of the Betz family began to notice other strange events related to the sphere. They discovered that when they rolled the sphere on the ground, it could change its trajectory at will and then return to the starting point.

* The Betz claimed that on one occasion the object had been in motion for about 12 minutes, until it finally returned to the point of origin.

The sphere also seemed sensitive to weather conditions, since these peculiarities became more noticeable on sunny days, as if the instrument received its energy from this source. Although clearly influenced by sunlight, the sphere did not show any alteration when exposed to sunlight or infrared rays. 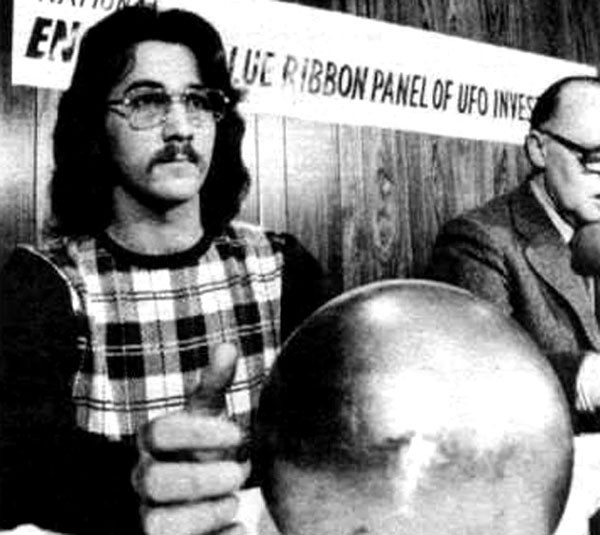 * The metallic globe seemed to emit a low-frequency vibration at certain times, as if a motor was operating inside the object.

Another intriguing fact was that there was a small triangular spot on the dial. This spot represented the magnetic region of the object.

Motivated by the strange discoveries made regarding the metal artifact, Terry began various home experiments. When the object came into contact with another metallic object, a hammer for example, the sphere seemed to vibrate like a bell. 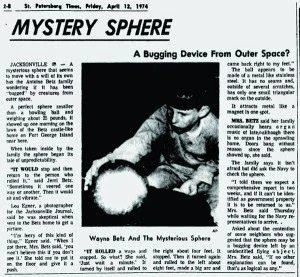 The strange ability of the sphere to move as if it had its own will ended up worrying the Betzes, so much so that they kept the sphere in a closed bag at night, believing that the spherical object could simply “escape”.

Finally the Bets decided to make their find public, so maybe they could find out what the hell that artifact was.

The local Jacksonville newspaper was so intrigued by the story that they were forced to send an experienced photographer, Lon Enger, to the scene to get some pictures.

When Enger arrived at the Betz home, he was eagerly greeted by Gerri who wasted no time presenting the sphere to him. Enger described the episode on June 12, 1974, in the daily edition of the St. Petersburg Times: “I was suspicious of this kind of thing. When I got there, Ms. Betz said, ‘You won’t believe it if you don’t see it.’”

It was then that the matriarch of the family told the still dubious photographer to give the sphere a little push on the ground. This is what Enger did, and for him nothing out of the ordinary happened because the sphere simply stopped when the force of the impulse it had given at the beginning ended. After a pause, however, the sphere reversed and headed to the left about twenty feet, made a great arc, and then returned to the photographer’s feet.

Enger examined the metal sphere carefully and, as the Betz family had done before him, he was unable to find any marks or signs of a manufacturer on the surface, just a triangular symbol stamped into the surface. So it was that the photographer reproduced the story to his editor to publish the report, and in the course of five days the Betz case exploded in the media in various parts of the world. 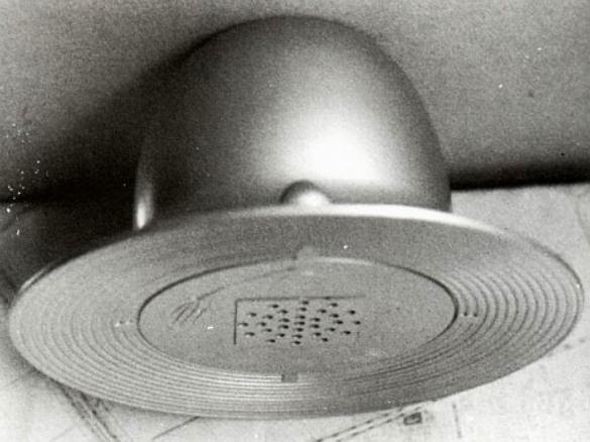 Reporters from prestigious publications such as the New York Times traveled from distant places to see this mysterious sphere with their own eyes, but it not only aroused curiosity among the press. The scientific and military communities also requested to analyze the strange object.

* Representatives of the United States Army and NASA contacted the Betz family, as well as ufologist researchers.

Visitors were skeptical, but almost invariably left stumped by the sphere’s unexpected abilities.

* A US Navy spokesman went so far as to admit on television that he was unable to explain his origin.

In an official statement provided to the press by the Navy, it was publicly stated that the sphere was not owned by the US government. The family, who had intentionally chosen an isolated place to live, became a target for the press who would not leave them alone.

Renowned astronomer Dr. J. Allen Hynek asked the Betz family to send the sphere to his office at Northwestern University in Chicago so he could inspect it personally, but Gerri refused, believing such an object could be confiscated. or lost.

To the chagrin of dozens of scientists and onlookers, the sphere remained in the Betz family home. The object remained on the property of the Betz until some new events began to happen, and to scare the owners of the sphere.

* Gerri Betz reported that she and her family began hearing organ music in the middle of last night, although there was never any such instrument in the house.

As if that wasn’t terrifying enough, the doors began to open and close, seemingly of their own volition, at all hours of the day and night. Until then Antonie and Gerri decided it was time to get to the bottom of this mystery.

After a series of terrifying nocturnal disturbances, the Betz family finally left the sphere to scientists at Naval Air Station Jacksonville. The initial efforts of the Navy metallurgists turned out to be complete dead ends, as their machines were not powerful enough to penetrate the object.

Chris Berninger, the Navy spokesman, reported the following: “Our first attempts at x-rays get us nowhere. We will use a more powerful machine on the sphere and also run spectrography to determine what metal it is made of.”

Eventually the station scientists were able to determine the exact size of the sphere and the weight, 9 kg. They also concluded that the coating was about a centimeter thick, which the report said meant it could withstand a pressure of 120,000 pounds per square inch. They also discovered that the sphere was made of a ferrous stainless metal, specifically magnetic.

Powerful x-ray equipment revealed two round objects within the sphere surrounded by a “halo” made of a material with unusual density. They also observed that the sphere had four different magnetic poles, two positive and two negative, which were concentric.

The Navy concluded that although the sphere was intensely magnetic, it showed no signs of radioactivity and did not appear to be an explosive. Navy scientists wanted to break the object apart to take a deeper look, but Gerri Betz refused this, fearing the sphere might be destroyed, and since it did not belong to the government, he requested that it be returned.

The Navy kept its promise and returned it, but many questions remained unanswered. At this point the Betz family began to seriously consider the possibility that they were in possession of authentic “alien technology,” or an “alien listening” device as some of their neighbors dubbed it.

On July 13, 1974, Dr. Carl Willson (representative of a research company in Louisiana known as the Omega Minus One Institute, in Baton Rouge) examined the sphere for more than six hours and discovered that the magnetic field around it was emitting radio waves.

Willson said that the sphere’s metal shell, when compared to stainless steel, contained an unknown element that made it a little different. And apparently he too witnessed the sphere’s properties of propelling itself across surfaces and suddenly changing direction. One of the postulated theories was that it could be a damaged alien probe or even some kind of anti-gravity device.

In the end, the results of the Omega Minus One Institute on the identity of the mysterious sphere were as conclusive as those of the Navy, and the Betz family was again left without unveiling the mystery. That same year of 1974, they sent the sphere to a great ufological research event, which would have the presence of well-known characters in the field. Terry was appointed as the object’s personal courier and was sent to New Orleans with the sphere.

Then the sphere became the center of attention again, and they put it through another series of tests. They concluded everything that had been previously said, including the fact that the device functioned as an audio transmitter.

Despite not knowing the origin of the object or what it was, they could not say that it was extraterrestrial. Dr. James Albert Harder, a professor of civil and hydraulic engineering at the University of California, Berkeley, became increasingly intrigued by the reports regarding the Betz sphere, and was fascinated by the opportunity to examine the object with his own hands. . The Betzes allowed him to analyze the artifact and the results were puzzling.

In an announcement made at the International Congress of Ufology, in Chicago, on August 24, 1974, Dr. James Albert presented surprising conclusions regarding the Betz sphere. He reported that based on x-ray studies, the two inner spheres were made of an element much heavier than anything known to science. “If someone tried to split the sphere, it could explore like an atomic bomb,” the man said. 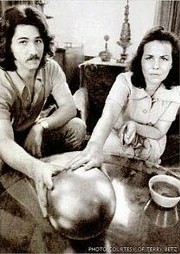 The Betz family expressed concern, but continued to possess the object. From that time the stories about the sphere seem to have disappeared without a trace. Just as the case took a fascinating, if not terribly dangerous, turn.

As time goes by, two basic questions remain unanswered: What the hell was that? Was he one of the famous “foo fighters” of World War II? Another mystery is what happened to the sphere, because after Dr. Harding’s report, the subject simply disappeared from the media.