Since the beginning of the new millennium, the human genetic plan of life is deciphered. But the functions and origins of many genes are still unknown. Sceptics are afraid of unscrupulous scientists that might create cloned “wonder-children” that could be ordered in a catalogue. But geneticists are sure that the knowledge is enough for a revolution in medical history. In ancient times people connected the evolution of life with the “tree of life.”

But what is a “tree of life”? In many texts of ancient cultures, it is written by gods that once created men and other creatures. Who have been those creative gods? Do stories of fabulous beings, amphibious creatures and mythical creatures are based on real experiences or are they only results of fantasies?

You might also like The great underground pyramid of Alaska! Makhunik: 5,000-year-old city of dwarfs who hoped to return one day Scaphism – The most horrible method of torture and execution in history

A disk shaped ancient artifact found in South America is one of the most interesting and puzzling finds of archaeology. The unique relic is made of black stone and measures about 22 centimeters in diameter. It weighs about 2 kilograms. On the disk, there are carvings that describe the astonishing knowledge of our ancestors. The object has been examined in the Museum of Natural History, Vienna, Austria. It was not made of artificial materials like cement but of lydite, a marine sedimentary rock that is formed in the deep sea. The artifact was discovered in the territory of Colombia, and was called the Genetic disc.

The disk, known as “Genetic Disc”, was dated in a prehistoric epoch, scientists estimate that the disk has been made almost 6000 years, and assigned to the Muisca-culture. Dr. Vera M. F. Hammer, the expert for precious stones and minerals, analysed the enigmatic object. The symbols on the disk are very impressive. Both sides of the disc are covered in illustrations of the intrauterine fetal development in all stages.

Moreover, a lot of information on human genetics are strung on the outside of the disc, Strange is that this information could not be seen with the naked eye but under a microscope or other advanced optical instrument. The current level of knowledge of humanity does not allow such a possibility, which induces a certain aura of mystery on how to obtain the information by a culture that did not have the technology to access such information. 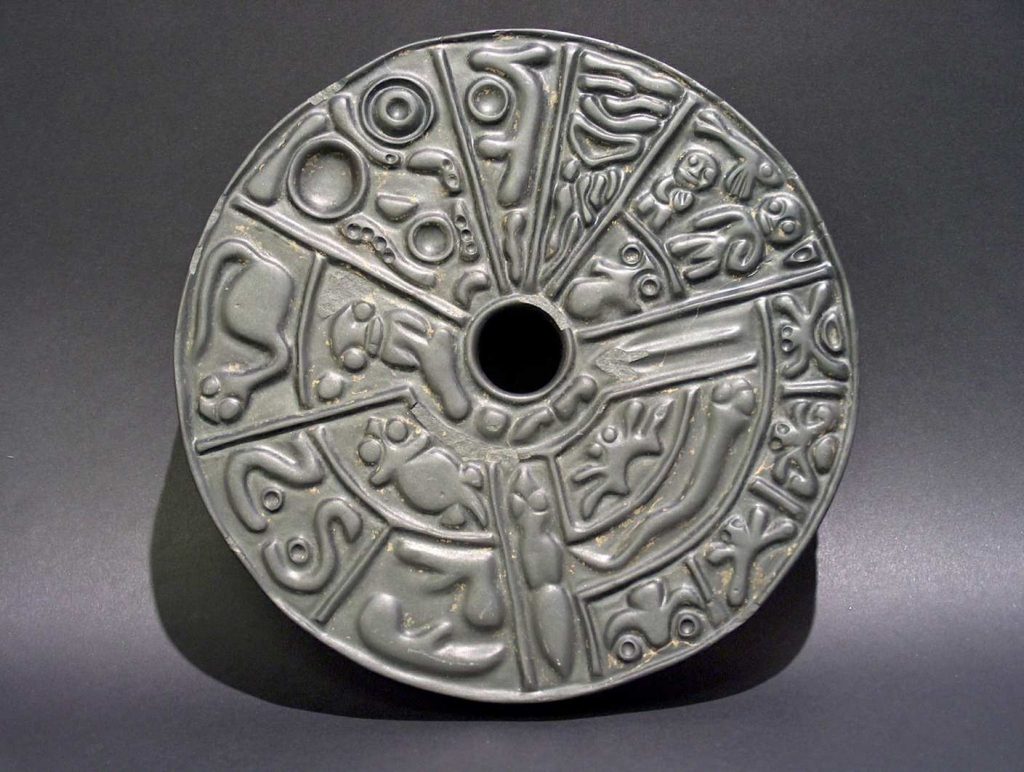 The main exhibits of the professor’s collection are the Genetic (also embryonic) disc, among other possessions, made from lydites – a stone, first mined in Lydia, an ancient country in the western part of Malaysia. The stone is similar to granite in the matter of hardness, but it also processes a layered structure along with the hardness, which makes it very difficult to work with.

The stone is also known as darlingite, radiolarite, and basanite, and has a bright color. Since ancient times, it has been used for the manufacturing of jewels and mosaics. But cutting something from it should have been impossible using the tools possessed by humans 6,000 years ago.

The problem comes from its layered structure, because it will automatically break upon contact with incisors. And still, the genetic disc is made from this mineral, and the drawings on it more closely resemble a print rather than a carving. It seems that when the mineral underwent treatment, a technique unknown to us was used. Its secret remains a mystery to this day.

Underground tunnels located throughout the jungles

Another mystery is the place where the stone was discovered. Professor Lega discovered it in the possession of a local citizen, who claimed he found the stone disc with the inscriptions somewhere around the city of Sutatausa. However, some researchers (for example writer of Ancient Astronauts theory, Erich von Däniken) believe that the disc could be from the rare collection of Father Carlos Crespi ― a missionary who worked in Ecuador in the middle of the 20th century. Father Crespi bought ancient objects from local citizens, which they found in fields or jungles ― from ceramics of the Incas to stone tablets.

The priest never categorized his collection, but it is known that there were objects which did not pertain to any one of the known ancient cultures of South America. Mainly, these were objects made from different metals, but there were also stone circles and tablets covered with inscriptions and drawings.