In its Season 48 premiere, “Saturday Night Live” took shots at ‘Maroon 5’ frontman Adam Levine for his recent cheating scandal. Well, he wasn’t alone, but Armie Hammer was also poked fun at by the “SNL” cast in a hilarious sketch. Read on to know all that happened at the season premiere of “SNL”. As for the characters, “SNL” host Miles Teller played the game show host, Halen Hardy while Mikey Day played Adam Levine. The role of Armie Hammer was played by James Austin Johnson. In the sketch, Kenan Thompson was competing as Neil DeGrasse Tysen and Bowen Yang as himself.

Miles Teller, started by explaining the rules of the game and stated, “This game is very simple.” He then addressed that there are four male celebrity contestants and all they need to do is reply to a woman’s DM in a way that is something “normal”. Whosoever sends a normal DM, wins $100 million.

The audience couldn’t hold their laughter when Mikey, appearing as Adam Levine, responded to a DM: “Hey, Adam, huge fan. Love your music.” He wrote: Ok, tough call. Can I see her most liked vacation photo?” he replied. Well, it was Levine and stopping her was no choice so after seeing the photo, he wrote, “All right. Going to kick things off with a ‘Holy moly!’ But I got three more, though. ‘Holy moly! Holy c***! Your body is making my penis smile.”

On the other hand, James Austin Johnson, who was playing Armie Hammer, responded to a DM: “Hey, Armie, hope you’re doing okay.” To this, he replied: “Alright, look, I know there’s been a lot of talk about me in the press, but I’ve done a lot of work on myself, and I’ve changed. So I have my message, I want to break open your bones and suck out the marrow.” This was regarding Amrie’s constant denial of ‘sexual misconduct allegations.

If you didn’t get the hang of it, then you aren’t updated about what went down with Adam Levine and Armie Hammer. As for the “Maroon 5” frontman controversy, recalled as the “sad, lazy Adam Levine sex scandal”. Well, Adam Levine was accused of cheating on his wife, by sending a series of flirty messages to several women.

Many women discussed his messages in public. One Instagram model, Sumner Stroh posted a video wherein she claimed that she had a brief affair with the singer and showed Instagram DMs as proof. Even though they don’t prove an affair, they surely were flirty.

In one instance, Levine asked this woman if he and his wife could name their child after her. Other women too came forward and revealed some screenshots of their DM exchange with Levine. Here are some of them:

“Woman: I’m so weird too and only listen to metal lol

Adam: Said no hot chicks ever other than you

Well, well, we don’t know what his wife, Behati Prinsloo has to say about it, but one thing is sure! As dumb as he sounds, metal as a genre has nothing to do with hot chicks. On top of it, he posted these messages from his verified account. Another wrong decision, he saved his tattoo artist’s number, phew. 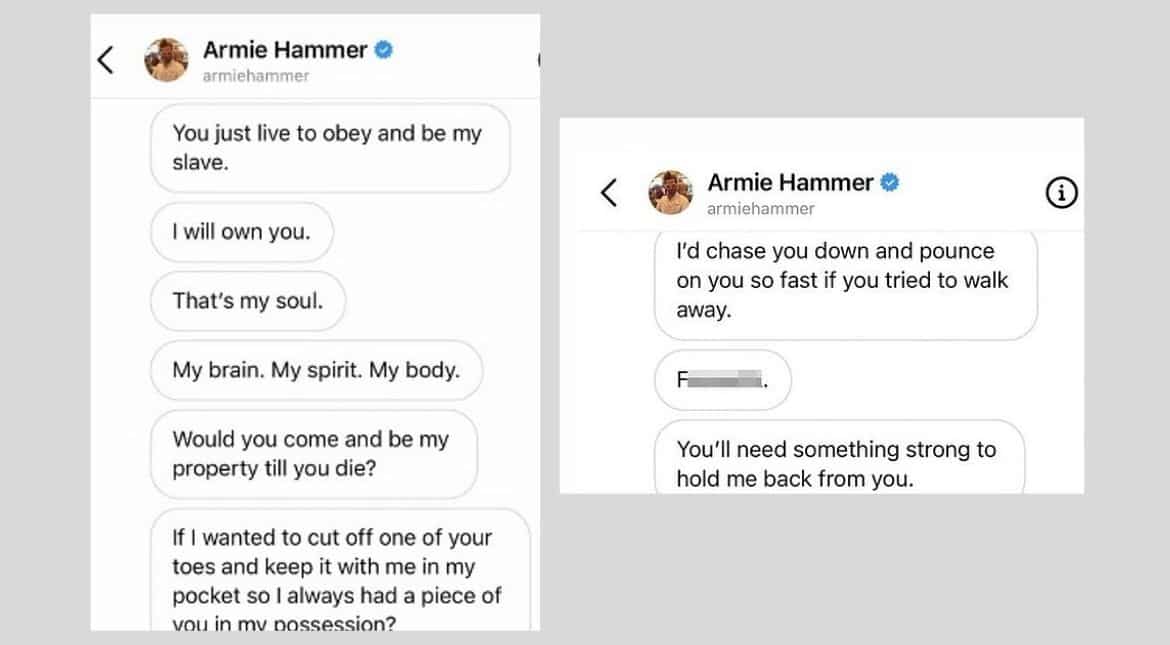 As for Armie Hammer, the “Call Me By Your Name” actor was accused last year by a woman, named, Effie of “violent rape and physical abuse throughout their four-year on-and-off relationship.” He was reportedly in rehab following the alleged scandal. Armie, however, has repeatedly denied these allegations. But hey, focus on Levine? Ain’t he dumb, eh? Well, I’d like to call him a “sad, lazy cheater”.