ESPN, ABC, and other Disney-owned networks have been scrapped from Dish and Sling TV as of Saturday, October 1, 2022, from 3 AM ET. This is due to the ongoing dispute between Dish and Disney where the two parties have failed to reach a mutually satisfying deal.

Dish claims that Disney is asking for almost $1 billion more to extend the carriage contract which expired on Saturday as a number of networks and local channels go dark on the services. However, Disney is claiming that Dish failed to offer “fair” pricing.

As what usually happens, both parties are blaming each other for the dispute while viewers are struggling to watch their favorite shows, movies, and live sports. Here’s everything you need to know about this piece of news.

A number of channels have gone dark on Sling TV and its parent service Dish this Saturday as the company falls into an extension agreement dispute with Disney while the existing carriage contract expired at 3 AM ET on October 1, 2022. 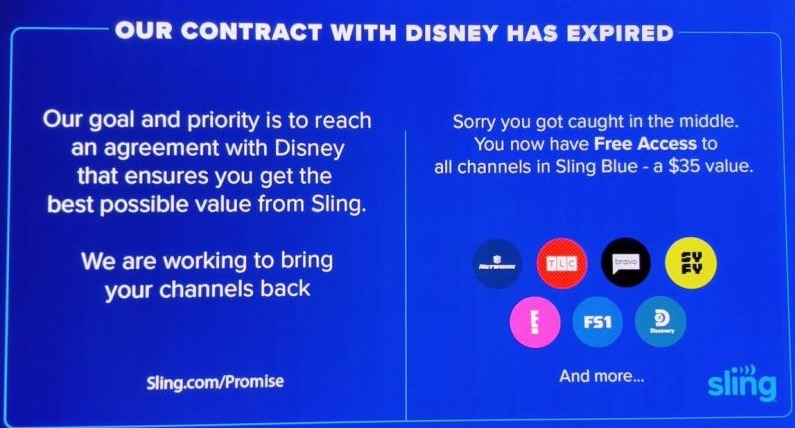 Here is the full list of channels that have gone dark on Sling TV and Dish due to the dispute between Disney and Dish:

You can’t tune into these Disney-owned networks on Sling TV or Dish now along with some local channels until the two parties reach a mutual resolution.

Dish claims it offered Disney a contract extension. However, it was rejected and the latter walked away from the negotiating table. “We were not able to reach a mutual renewal agreement with Disney and without a contract in place we are legally required to remove their channels from our service,” said Dish in a statement.

The Colorado-based company also accused Disney of holding “viewers hostage for negotiation leverage.” It says that Disney wanted Dish to insert ESPN and ESPN2 into packages that don’t currently include sports channels.

Along with that, Disney also wanted to upend a policy that lets Dish subscribers remove local channels to save money. “Now Disney wants to take this away by forcing most Dish customers in their ABC markets to pay for local channels,” said Dish.

Moreover, Disney demanded almost $1 billion more than what Dish was offering for the networks.

Disney is Blaming Dish for the Extension Contract Dispute

Meanwhile, Disney is putting the blame on Dish for failing to close the deal. Disney claims that it didn’t receive a fair offer from the company to keep the likes of ESPN and National Geographic on Dish and Sling TV broadcasts.

“After months of negotiating in good faith, Dish has declined to reach a fair, market-based agreement with us for continued distribution of our networks,” Disney said in a statement. 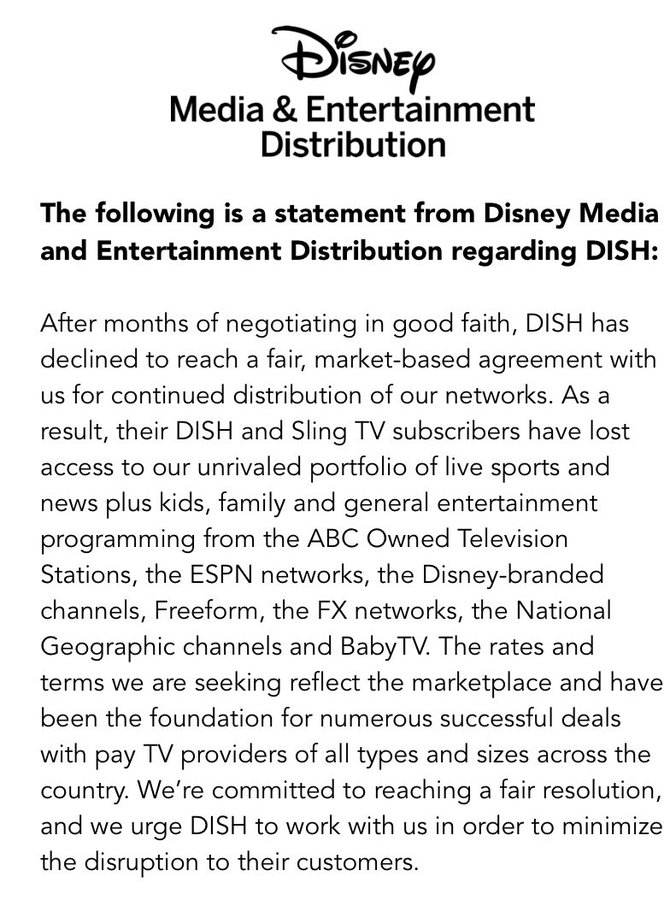 “The rates and terms we are seeking reflect the marketplace and have been the foundation for numerous successful deals with pay-TV providers of all types and sizes across the country. We’re committed to reaching a fair resolution, and we urge Dish to work with us in order to minimize the disruption to their customers,” the statement added.

What can you do amidst the Dish and Disney dispute?

If you are a Dish or Sling TV subscriber, you’ll be on the suffering end until the dispute between Dish and Disney is resolved. You can’t watch ESPN, National Geographic, or ABC channels on Sling TV or Dish programming anymore. The channels have gone black.

This means you’ll be missing out on your favorite shows, movies, and live sports. For now, you can find replacements to watch what you love. For instance, ESPN+ can serve as a nice and less inexpensive replacement for the ESPN channel.

Furthermore, you can find NFL games on the official NFL app which offers a seven-day free trial to new users. You can also use the Disney+ app to enjoy movies, shows, and other programs.

Not the First Dispute From Either of the Parties

This isn’t the first time that Disney and Dish are involved in a major dispute but they are against each other for the first time. Previously, Disney’s channels were removed from YouTube TV last December over a carriage fee dispute.

However, the collision didn’t last long and the channels returned a day later. ESPN and local ABC channels faced critical disruptions during that dispute.

Meanwhile, Dish also had a dispute with HBO in 2018. This led to HBO and Cinemax disappearing from Dish and Sling TV. 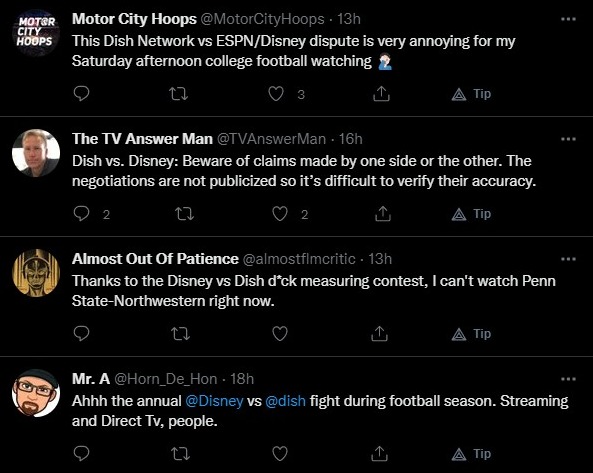 Let’s just hope that Dish and Disney resolve their disputes soon and viewers get to see uninterrupted coverage of their favorite programming. Although the two parties involved seem pretty stubborn at the moment and a quick resolution is appearing highly unlikely.

Who do you think is right in this battle? Feel free to express your opinions and thoughts using the comment box.