Mila Kunis and Ashton Kutcher are soulmates, a true Hollywood love story in real life. The two of them first met as costars back on That 70’s Show.

They played an on-again-off-again couple. Mila Kunis played Jackie Burkhart while Ashton Kutcher played Michael Kelso. Even though there was incredible chemistry between them back then, it took them around 15 years to find their way back to each other.

Let us take a look at their timeline.

They met for the first time on the show where their characters were boyfriend and girlfriend. Mila Kunis was only 14 years old while Ashton Kutcher was 20 at that time.

In 2001, Kunis revealed in an interview that the couple had their first kiss during the show. It was also her first kiss ever! She talked more about what she thought about Kutcher and said “I was like, ‘Oh, he’s so cute, it’s the Calvin Klein model!’ ” 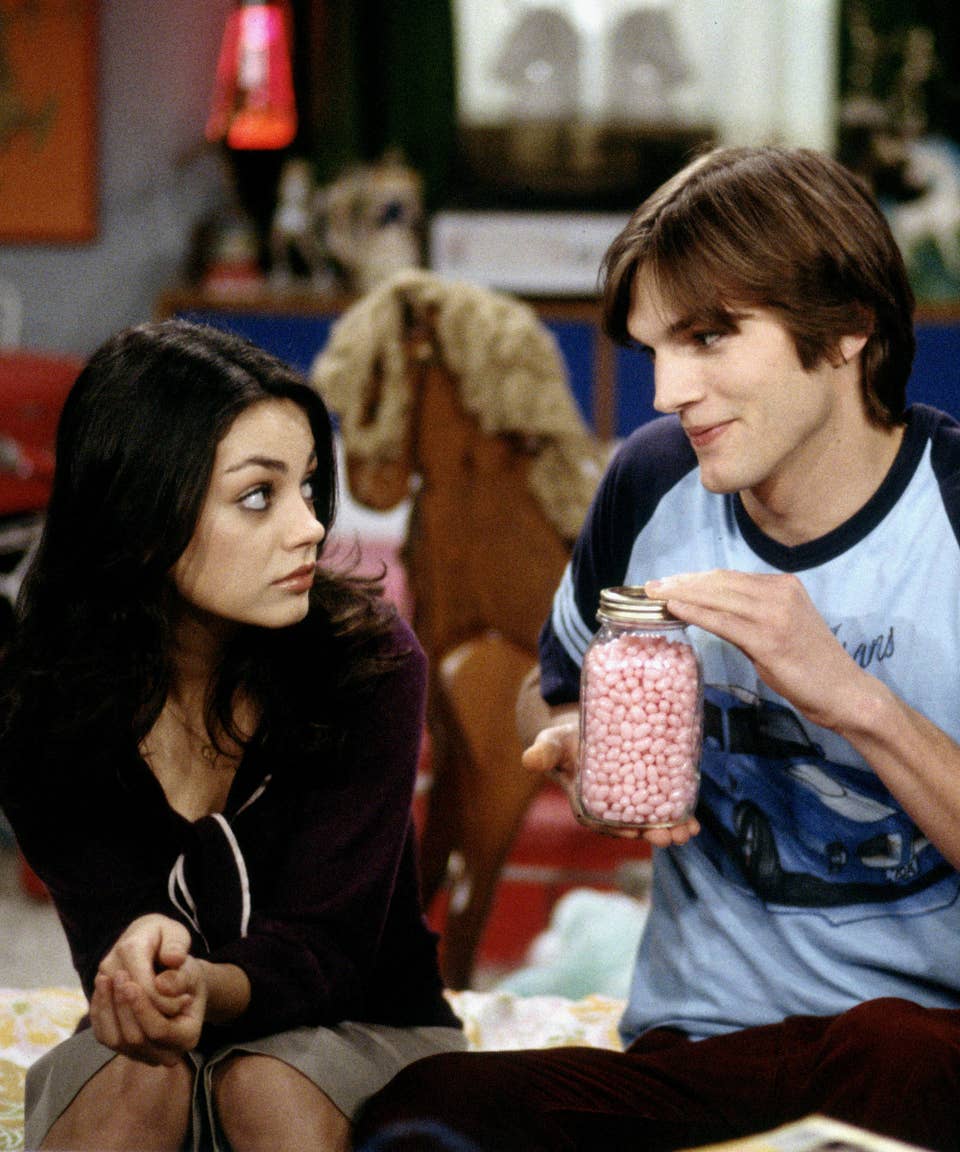 Interestingly, Kunis had the biggest crush on him while on the show. Talking about the kissing scene, she said “I have to kiss him?’ I was so nervous and uncomfortable.

I had the biggest crush on him.” Kutcher played the perfect gentleman and eased her by cracking jokes and giving “funny little compliments”.

Recalling the experience, Kutcher said “I was so nervous. She acted so cool. She seemed as if she’d done it a thousand times. I was the one with the butterflies in my stomach. I mean, here’s this little girl and I have to kiss her. It was nerve-racking.”

Their chemistry on That 70’s Show seemed to be the end of their romance, especially when Ashton Kutcher and Demi Moore got married in 2005. This would be the end to what fans hoped would flourish into a romance between the two costars. During the year that Kunis was going through what she called a “horrible” breakup, Kutcher’s marriage to Moore also fell apart.

Demi Moore released a statement in which she said “It is with great sadness and a heavy heart that I have decided to end my six-year marriage to Ashton.”

Kutcher echoed the sentiments and stated “I will forever cherish the time I spent with Demi. Marriage is one of the most difficult things in the world and unfortunately sometimes they fail.”

While Kutcher and Moore seemed to be happily married, Mila Kunis quietly split from her boyfriend of eight years, Macaulay Culkin. In a later appearance, she called it a “horrible, horrible breakup”. 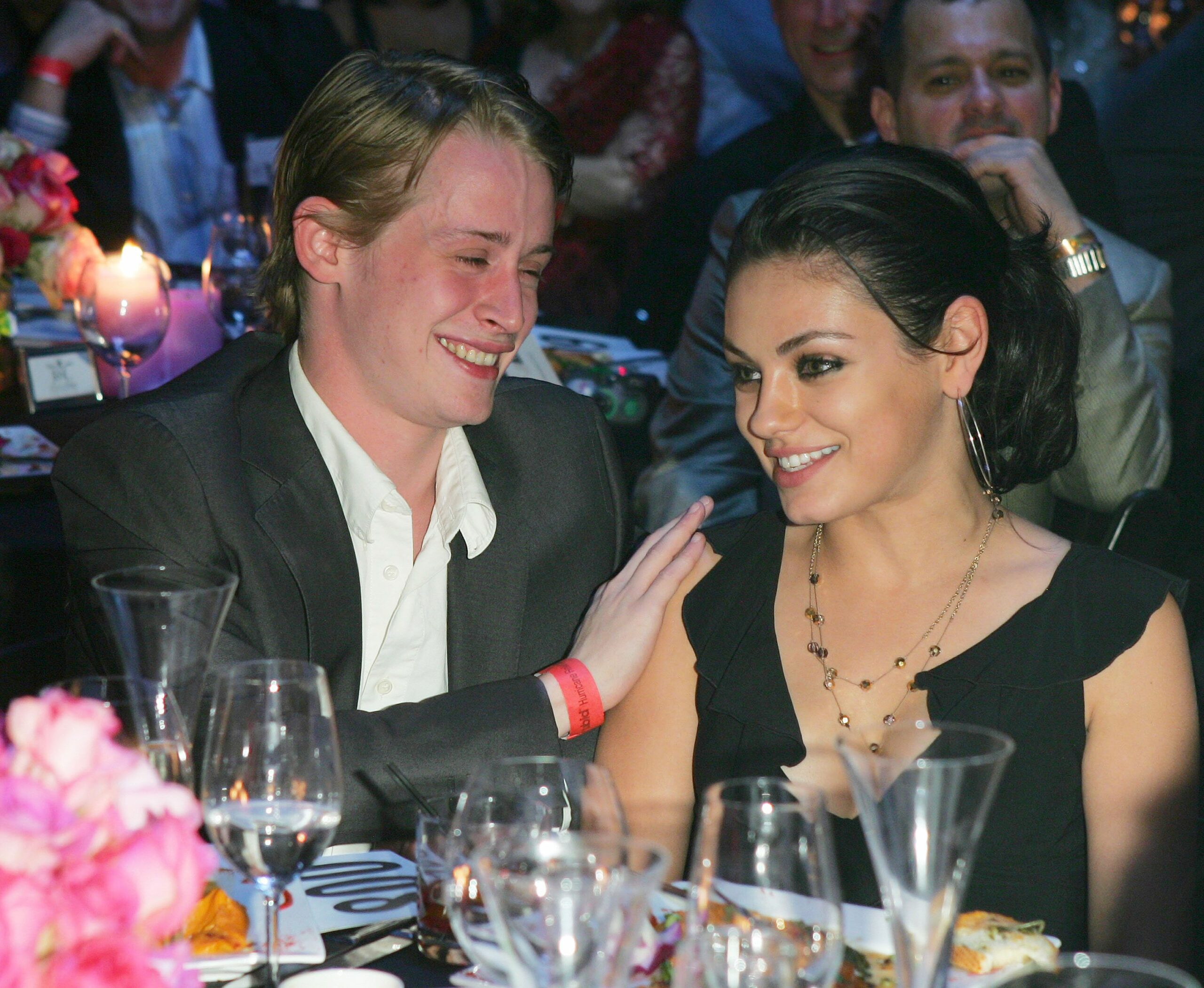 As fate would have it, the two were not done with each other yet. Kunis and Kutcher’s paths crossed again at the 69th Golden Globes in 2012.

Kunis later revealed in an interview that “I thought it was the weirdest thing that I was checking this guy out, and it was someone that I had known forever.” She added “I was looking around, and there was a really beautiful man from the back. I was literally like, ‘Oh, he’s kinda hot’ … and then he turned around, and I was like, ‘Oh my god, it’s Kutch.’ ”

After reuniting at the Golden Globes, Kutcher invited Kunis to his housewarming party.

Both had different stories of how the night went down. Kunis said that Kutcher was trying to set her up with one of his friends and that did not happen.

Kutcher said that he was still a smoker back then and she wanted to shotgun cigarette smoke “so she could breathe it in”. He added, “And gradually through the night, it got closer and closer and closer … It was kind of obvious that things were happening.”

Ashton Kutcher & Mila Kunis Start Dating And Move In Together-2012

After the party, the two of them started seeing each other casually. Both of them had just come out of long-term relationships and were not willing to get serious just now.

Kunis said in an interview “We were just like, let’s just hook up. Let’s have fun. We’re both single. We both trust each other. Everything’s great.”

Despite their mutual agreement to take things slow, they fell for each other and the relationship quickly turned serious. The couple even moved in together in 2012. 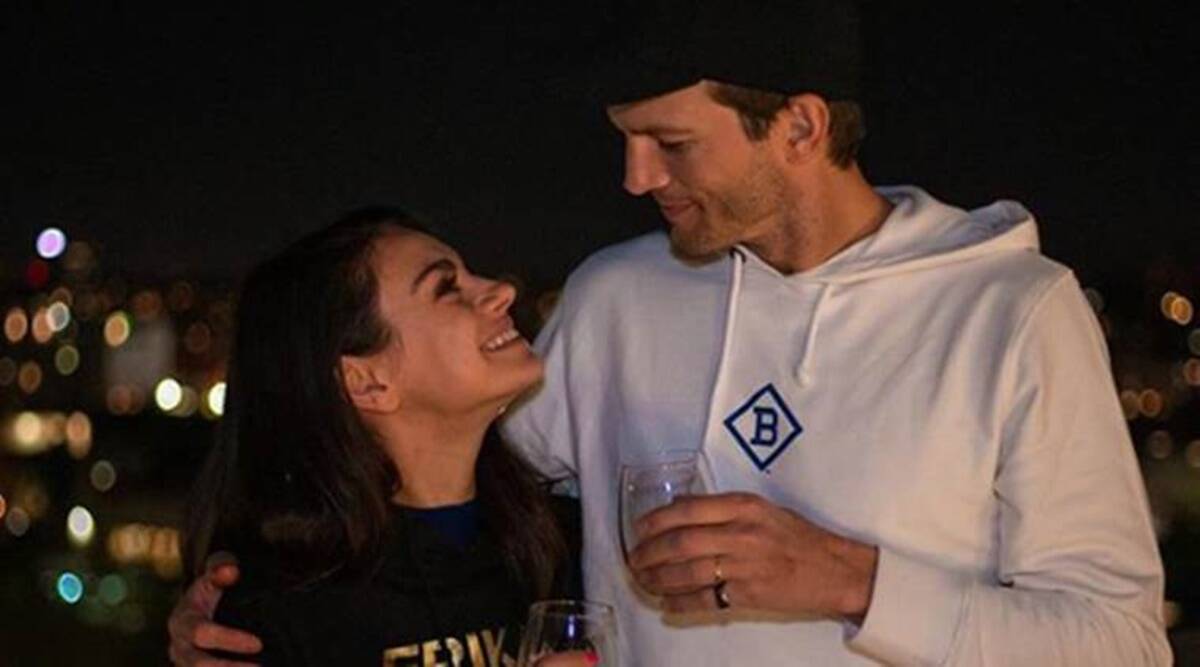 Kunis admitted that she developed feelings for Kutcher “overnight”. She voiced them and told Kutcher “I was like, you know what, I actually care about you. I don’t want to mess anything up so I’m just going to walk away before it becomes too much.”

She said that Kutcher said “Got it” and that was supposed to be the end of it all. However, the best was yet to come.

In 2014, Kunis was seen walking around with a diamond ring on her finger. A source close to the couple revealed that Kutcher asked Kunis’s father for his blessings around Christmas. It was also revealed that the couple was not keen on waiting for too long to get married.

A little after their engagement became public knowledge, it was confirmed that Kunis was pregnant with the couple’s first child. A source close to the family revealed “They are both very, very happy. It’s still early.” On the 1st of October, the couple welcomed a baby girl named Wyatt Isabelle Kutcher.

He posted the good news on his website and wrote “Mila and I would like to welcome Wyatt Isabelle Kutcher to the world. May your life be filled with wonder, love, laughter, health, happiness, curiosity, and privacy.” 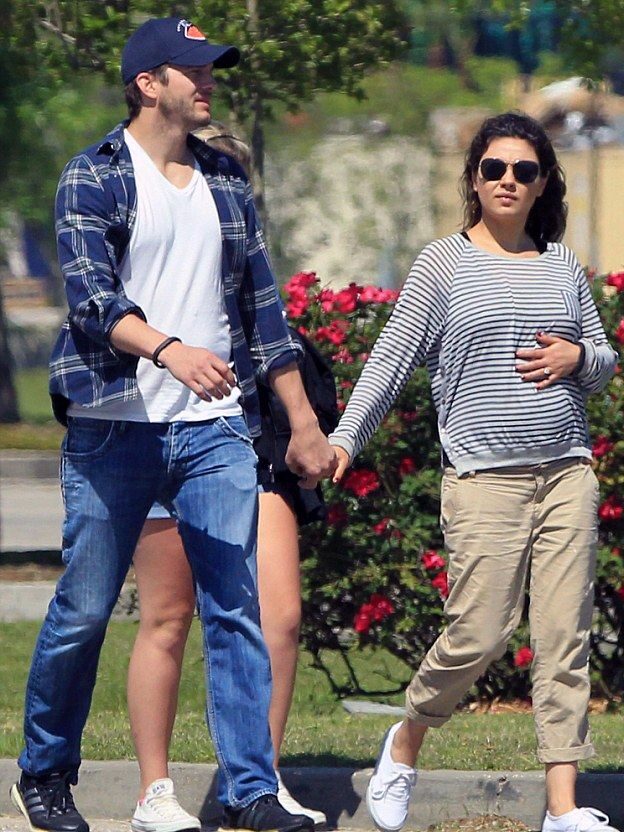 In classic Kutcher style, he also joked “Can you guess which one is ours, or does it really matter? All babies are cute.”

The couple secretly got married in a low-key ceremony in July of 2015. A source revealed that the wedding took place at the Secret Garden at Parrish Ranch in Oak Glen, California.

Details about their wedding were never officially revealed. But Kunis is said to have worn a white dress and so did her daughter.

The happy couple welcomed their second child in 2016. Their son Dimitri Portwood Kutcher was born in November. He had previously stated that he was secretly “hoping for another girl”.

He joked that “First of all — our first girl is unbelievable. But also I figured if we had a girl second, [Mila] might give me one more shot at having a boy and now I don’t know!” He jokingly added, “It’s even money—she might cut me off!” He concluded by saying that his daughter was excited to be a big sister.

The Couple’s Relationship And Previous Partners

Kunis opened up about Kutcher’s marriage to Moore and defended their relationship by saying that it was a “normal, real relationship”. She also said that Kutcher was quite fond of Moore’s three children and that he helped raise them while they were married.

Talking about her relationship with the Just Married actor, she said that it is one of the “weirdest story that nobody believes”. But she also believed that they were meant to reconnect after all these years.

She  believed that their younger selves would not have lasted together. She said “The people that we were back then would never be together. But it’s just such a bummer that we missed out on 20 years together.”

However, The Bad Moms actress also added that “But we would have never been together if we didn’t both go what we went through in order to be the people that we were when we met.”

The happy couple’s relationship has not been free of rumors. Back in 2019, tabloids started reporting that the couple had secretly broken up and parted ways. 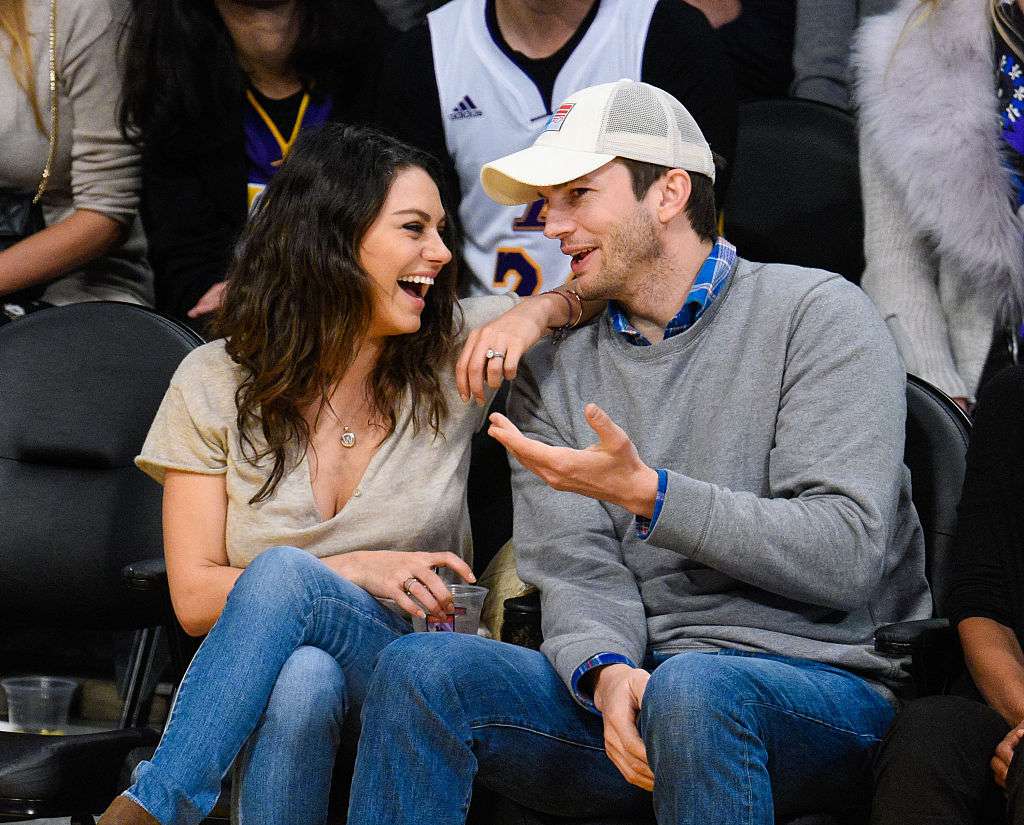 The couple posted a video on her Instagram where she was holding a copy of In Touch magazine with the headline “It’s Over” along with a picture of them. Kutcher then asked his wife “Babe, what’s happening, what’s going on?”

Kunis jokingly responded, “It’s over between us”. Kutcher reacted by saying “oh my God, what are we going to do?”

In years of being together, the couple has rarely done any interviews together. Even their appearances together are few and far in between. For what seemed to be the first time in ages, the couple did a Cheetos Superbowl commercial along with rapper Shaggy in 2021.

Kunis even joked that they did the commercial to get away from their kids during quarantine. “I hate saying it but we were like, ‘Freedom!’ ” she said.

Recently, the couple came together to express their support for Ukraine amid the Russia-Ukraine war. Kunis had grown up in Ukraine. The two discussed a GoFundMe fundraiser and said that they would be donating around $3 million “in an effort to raise $30 million”. Within a few weeks, the couple reached their goal and raised more than $30 million. In an emotional Instagram post, Kunis wrote “our collective effort will provide a softer landing for so many people as they forge ahead into their future of uncertainty.”

The couple also made an appearance in the spinoff series of That 70’s Show called That 90’s Show.