Hilary Swank will play the lead in the new upcoming series Alaska Daily. The series narrative is now actually interesting. Swank plays a journalist looking for a new beginning in Anchorage, Alaska, in the series.

Eileen is a New York journalist who relocates to Alaska for a fresh start and seeks atonement both personally and professionally after joining an Anchorage daily metro newspaper.

But there’s a lot going on because she’s dealing with a cold case of girls. There hasn’t been a clue in over two years, but someone must know something. And no one is speaking up. Shows that feature cases like this make us wonder if they are based on true events. Let’s look into it today.

If you were hoping that the happenings in the series would be based on actual events, the answer is no. The characters in Alaska Daily are made up. But the narrative is based on real-life cases of missing indigenous women in Alaska.

The original newspaper said, “The events in the TV series are not based on any one person, story, or even place. A central storyline involving an unsolved homicide, for example, takes place in a fictional rural hub and draws on elements of generations of systemic failures.

The journalists portrayed on the show are also amalgams or archetypes rather than being based on Daily News employees. Same with other Alaskans.

All of that’s to say, the show is fiction. The ‘Alaska Daily’ newsroom is like the fictional fire station in ‘Chicago Fire’ or the Seattle hospital in ‘Grey’s Anatomy.’ It’s not a documentary.”

Anchorage Daily News addressed and spoke a little about the upcoming series.
The real-life newspaper said, “In 2018, after the murder of Ashley Johnson-Barr in Kotzebue and revelations from sexual assault survivors in Nome who said police had failed to investigate their cases, we issued a callout to readers asking for help in reporting on sexual violence in Alaska.

A lot of Alaskans responded, many describing specific and repeated failure points within the criminal justice system.”

Adding, “The creators of the show talked to a number of ADN staff members about our work. They built a newsroom in some ways eerily similar to our own, complete with a snacks-and-puzzles table.

They studied what we wear. We’ve tried to help them understand our work, and Alaska, as best we’ve been able. We have a lot of respect for what they do. At the end of the day, it’s their story to tell.” McCarthy, the creator said, “I felt like the thing I didn’t really get to explore was the personal lives of journalists, get to know who they are.

And especially, I would say, in the last 10 years, the sort of rhetoric and vitriol directed specifically at journalists has really been amped up. And I think, incredibly unfairly and quite on purpose. You know, why not reduce the power of the press? It makes a lot of things easier, including corruption, small and wide scale.”

Adding, “So I thought, man, what’s something I could do if I had an opportunity to make a TV show? And I thought, wouldn’t it be interesting to really get to know who are these journalists, specifically involved in local journalism? Can I humanize journalists? Can I get a sense of who they are and what makes them tick and why they do the work they do?”

What Does Hilary Swank Think About The Journalist?

Swank described her personality in the series as Eileen and said, as being “very into details. For her, being a journalist is about finding the truth and putting that out for people to discover for themselves.

I think that’s something that people are really wanting right now in general, not opinions, but just going back to good journalism where you’re trying to get to the bottom of things. That’s (Eileen’s) sole objective, and she loves it.”

The actress also said, “She [Eileen] doesn’t suffer fools. I don’t think she’s rude; she’s very New York, very matter-of-fact, and she calls people on what she feels is BS. She’s hell-bent on continuing to reveal that the article she wrote was true, that her source was good, and to keep digging deeper into that specific investigation.”

She added, “When she goes to dinner with her old boss, who’s courting her to come to Alaska, Eileen sees pictures of these women, and understands — as she starts doing research — that this is a huge, horrific situation, and nobody is investigating.

Another woman disappears and gets forgotten, and another. Even saying that gives me chills. There’s no world in which that should ever be happening, especially now in 2022.” 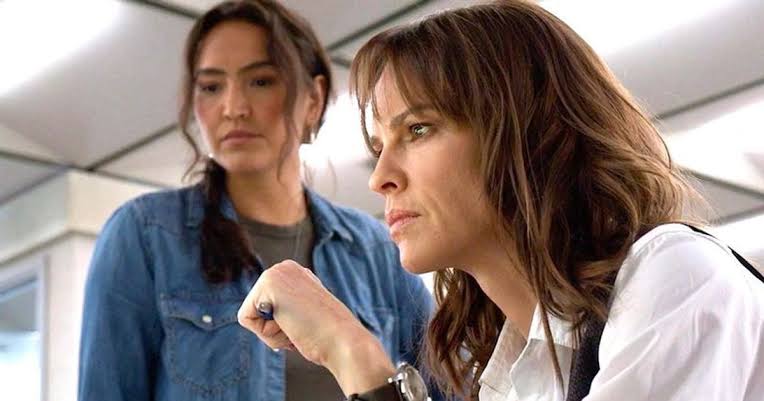 Hilary Swank also revealed what attracted her to the series.

“You know, I love people and I love what makes them tick. And I love people who persevere through adversity. I love outsiders. I love the underdog. What makes us all one person? At the heart of these stories, all everyone wants is to be seen and everyone deserves justice.

I think a lot of the roles that I choose have that theme in one way or another and I feel like Eileen Fitzgerald is a truth seeker. She’s an investigative truth seeker, and she wants to make sure that justice is done and that people see the truth in situations.

I feel that that aligns with what people in the world want right now, they don’t want to be lied to anymore.”

Eileen Is Going In The Bottom Of The Cold Case

Hilary said that the journalist is determined to solve the case.

“She is going to get to the bottom of the truth one way or another. No one’s going to stop her from getting there. And I love that she does her homework; she knows her rights and if she doesn’t, she quickly learns them.

It’s kind of fun to see this award-winning journalist go up to Alaska and… she just kind of shakes it all up. It’s something I admire in people — people who don’t give up, who persevere.”

What are your thoughts on this? You are welcome to drop your opinions in the comment section below.