What’s life without a television in your home?

The idiot box is where all the entertainment lies. You catch every second of your favorite shows,  Netflix and chill, watch the latest news, and keep running your fingers all over the remote in search of that perfect movie to watch on a weekend. Your television entertains you so much. Hence, you should make it a point to clean it regularly and keep it in excellent condition.

Just like furniture and electronic appliances inside your home, your television also accumulates dirt and dust on the surface. You need to clean your television screen regularly to keep it free from dust, dirt, and fingerprints.

How to Clean Tv Screen Properly without Harming your Television?

Cleaning your television should be done meticulously because when you use the wrong products in the process, it may lead to permanent damage to the screen and also negate the warranty. Here are the quick tips that let you clean your television screen securely.

Use a Microfiber Cloth

Modern television screens are sensitive to pressure. Thus, if you use any heavy fabric to clean the screen, the television may get scratched. Always use a microfiber cloth to clean your television screen regardless of it being an LCD, OLED, or plasma.

A microfiber cloth is woven in small fibers that makes the pressure on the screen more even and reduces the chance of causing any scratch or damage to the screen. When you use a microfiber cloth, ensure to use it in the corners and edge of your screen. Perform this cleaning without using too much pressure.

Do not Use Tissue Papers We strictly advise not to use tissues, paper towels, or any other material to clean your television screen. These cleaning materials contain fibers that may damage the screen. Even if you clean your old-school CRT display, use a microfiber cloth instead of tissue paper. Alternatively, you can clean its screen with an electrostatic duster.

Spray Liquid on the Cloth

While cleaning a television screen, many people succumb to one big mistake – spraying the cleaner or liquid on the screen, not the cloth. It is the wrong method to clean your television and may damage its screen in the long run. If you are using any liquid on your TV screen, spray it on the cloth in a fine mist and then use it to clean the television screen to avoid damaging the internal parts. Do not use pre-treated dusting cloths to clean the surface of the television.

Wipe the Surface in Overlapping Strokes

If you want to avoid streaks while cleaning your television, we recommend using overlapping strokes to clean the screen. You can either go horizontally or vertically with the cleaning process. Once you have performed this step, go over the screen with a dry cloth to eliminate the residue.

If your television set rests in the cabinet or a console, clean it just as much so that the dust does not interfere with the speakers and ports.

Cleaning Stubborn Spots off the Television

Sometimes, your television may also accumulate hard-to-clean spots. The events such as the spilling of liquids are the most common case where your television screen may gather some stubborn stains.

So, how do you deal with such spots?

We recommend using a dilute mixture of distilled water and mild dishwashing soap to clean the TV screen. If you have a flat-screen television, avoid using harsh chemicals such as toluene, acetone, or ammonia in cleaning.

If you are buying a screen cleaner, check its ingredients and buy the one that doesn’t contain an abrasive, which may lead to scratching the television screen.

You Can Skip the Cleaning Kit Do Not Turn a Blind Eye to the Remote Control Always remove the batteries of the remote control before cleaning it. Use a dry microfiber cloth in the process.

Along with cleaning the remote control, dust the external speakers. Like the television screen, speakers also become prone to dust and dirt. Cleaning them becomes a must to maintain them in the long run.

You can use a vacuum cleaner to dust the speakers. Alternatively, you can also use a lint roller to safely de-fuzz your speakers. Always cover your speakers with a speaker cover to keep the accumulation of dirt and dust at bay.

Instead of buying a television screen cleaner from the market, you can make one at home. All you need to do is to mix distilled water with white vinegar in equal amounts. If you do not like the smell of vinegar, you may alternatively use one part isopropyl alcohol with four parts distilled water and prepare your own television cleaner.

Other tips to consider while cleaning television 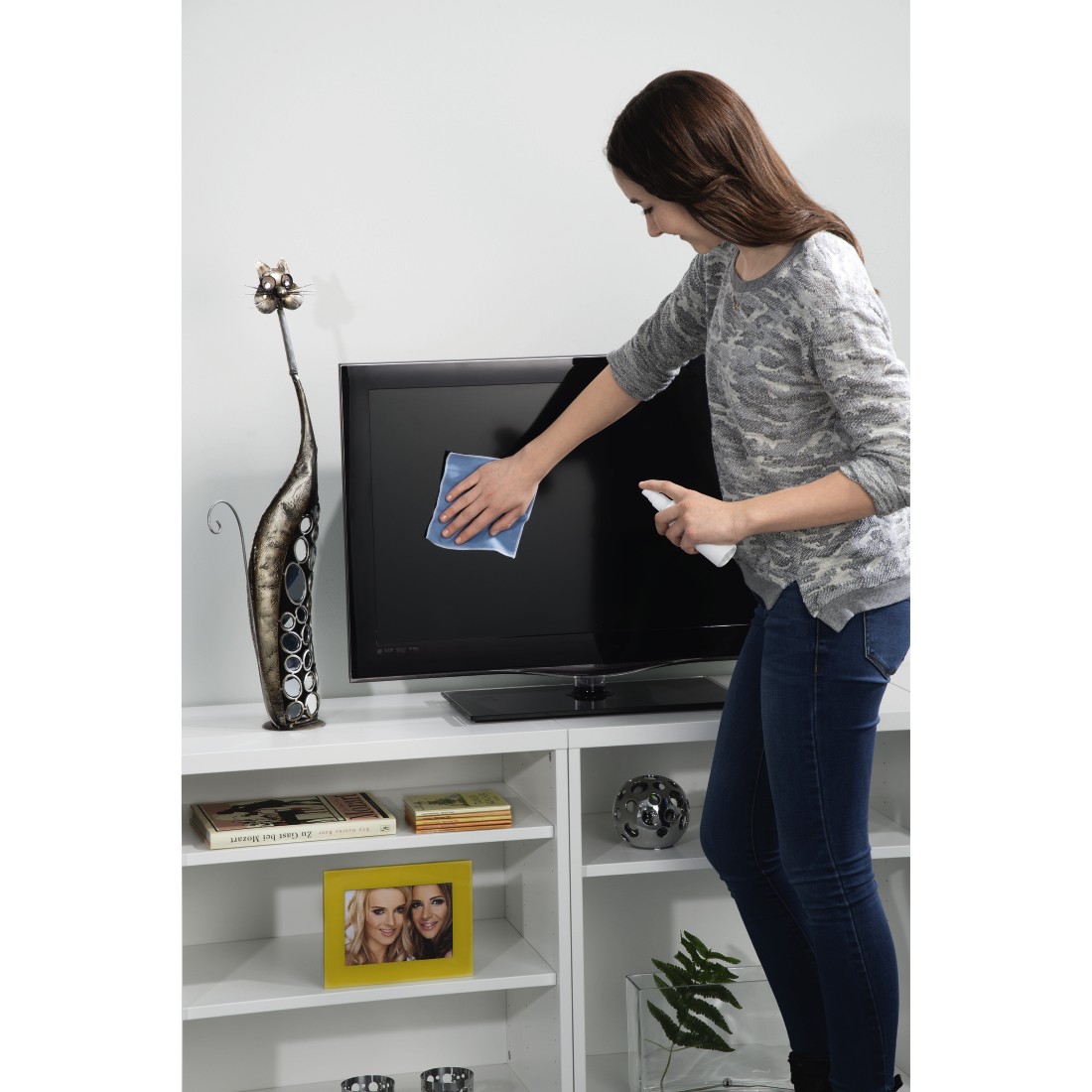 We hope the above-listed tips help you in cleaning your television effectively. Keep in touch for good housekeeping tips.