Often celebrities are rumored to have plastic surgery done, as they want to look their best when in front of the camera, which is quite often, given their public lifestyle. Famous American singer and rapper Doja Cat is a new addition to this list. Let’s find out whether she has undergone plastic surgery or not!

Who Is Doja Cat?

Doja Cat, who was born Amala Ratna Zandile Dlamini in California, is a famous American rapper and singer. She has collaborated with various artists including Ariana Grande and The Weeknd. Apart from being a singer, she is also a songwriter. She began a career in music when she was just a teenager when she began making and releasing music on SoundCloud.

She got the spotlight when she released the song ‘So High‘ when she was just 17 years old. She was noticed by RCA Records, with whom Doja signed a joint record deal. This was the beginning of her career. She released her first studio EP called ‘Purrr!’ in the year 2014. Her breakthrough was with the album ‘Hot Pink’

Some of her other famous and hit singles include: Woman, Boss Bitch, Kiss Me More, Need To Know, etc. Her most recent album was ‘Planet Her‘, which was released in the year 2021.

When A Youtuber Made False Claims About Her Plastic Surgery!

In March 2022, a youtuber named Lorry Hill did false claims that Doja Cat has had Plastic surgery done. Lorry Hill has removed the controversial video from her channel now, but in the video, Hill was seen comparing Doja’s before and after pictures from 2014 and 2020. The video had gone viral and got Doja Cat’s attention as well.

Denying her false claims, Doja said that Hill produced “lies” about the singer having plastic surgery on her face or body. She also added that she looked different in those pictures from 2014 because she was very poor at that time and depended on boyfriends to buy her food. 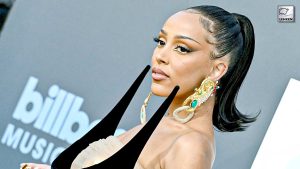 After this, Lorry cleared the false claims made by her and apologized to Doja.

So, Is Doja Getting Surgery Done?

Even though Doja has always denied the fact that she undergone any plastic surgeries till date, she has said in an interview that she wished to get cosmetic procedures done in the future. She has been open about this with her fans. On November 28, 2022, Doja Cat said in a tweet that was thinking of having Plastic surgery done. In her tweet, she said: “I’m literally about to get surgery this winter lmao, I just want my titties pulled up cuz some of my tops don’t fit the way i want them to.”

Doja Cat’s views on this were way different from what they were in the year 2018. She was always against getting fake boobs as she felt they would look saggy and pulled-down. But her views on the topic have changed now, as she is will opt for breast augmentation surgery real soon.