While people try and connect dots with anything that’s said in “The Simpsons”, for instance, the fake news of ‘Queen Elizabeth II’s death prediction’, the fan-favourite series has made some startling predictions that turned into real-life events. As a fan of this series, you may be aware that the quote, “The Simpsons have done it again!” has become extremely popular over the years. Well, the longest-running American sitcom (1989-present), may have some secret weapon to predict the future, as revealed by its showrunner Matt Selman last month. Here is everything you need to know about what the satirical series predicted recently and whether it’s true or false. A false claim! Since Queen Elizabeth II passed away on Sept. 8, 2022, several images and videos circulated on social media platforms, with captions like, “The Simpsons have done it again!” One such video gained more than 16 million views.

It all started when a cartoon version of the longest-reigning queen in British history became viral. In this image, the queen was seen lying in a casket and below it was written: “Elizabeth II: 1926-2022”. Rumors started airing as this image contained a sticker in the background from “The Simpsons”, displaying the D-Day date (September 8, 2022). Everyone takes “The Simpsons” predictions seriously. Recently, social media was full of wild claims that the world will end on September 24, 2022. However, people started connecting “The Simpsons” 2012 episode “Homer Goes To Prep School”, making claims that the series had already predicted the end of this world on this date.

So where did this all start and what does it have to do with “The Simpsons”? If you’ve watched “Homer Goes To Prep School”, which aired on September 30, 2022, you’d know that in the said episode, Homer joins a survivalist group, and tells Marge, “The apocalypse is coming. Maybe not tomorrow, maybe never, but it’s coming.”

As the German politician Friedrich Merz’s video gave birth to these false claims of an Apocyplyse, some overly smart people also took up the aforementioned episode of the American sitcom and started framing their own theories. As the episode was number 24/9, social media users began saying, “The Simpsons have done it again.”

This German politician made a mistake while addressing the actual date. Merz was referring to the date of the Russian invasion of Ukraine, i.e. Feb. 27, 2022. So yea, I can say the world is not ending on Sept. 24th for sure! The Simpsons’ team of writers have continued to astonish fans with their eerie predictions. In season 6 of the series, Homer was seen feeling threatened for his life when a bunch of robots come to harm his family. It was said: “Got to listen to me, the elementary chaos theory tells us that all robots will eventually turn against their masters and run them up.”

Now, this is something that has been showcased in “Love Death+Robots” too. While the prediction hasn’t become an absolute reality, the incredible advances in technology and the AI’s takeover are signs that this could potentially happen, and it’s something that’s been happening already. FYI, PwC predicts that “by the mid-2030s, up to 30% of jobs could be automated.”  It has also been reported that machines would replace 40% of the world’s workers within 15 to 20 years. 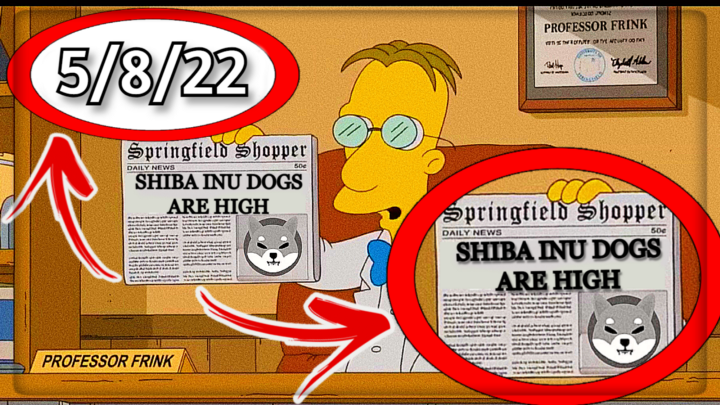 In 2019, a startling prediction was made in ‘The Simpsons’ Season 31, Episode 13 called “Frinkcoin”. In this episode, the writers gave made a comical mention of the crypto coin called Shiba Inu Coin. It was narrated that the Simpson family was eating lunch at “The Lentil Institution” when Lisa chooses Professor Frink (Developer of Frinkcoin) and interviews him.

Mr Frink becomes a rich man, thanks to the Frinkcoin, but later gets involved in a tussle as Smithers gathers a team to create “Burns Coin”, developing a formula so it could evaluate Frinkcoin.  During the episode, a newspaper clipping showcases the face of Shiba Inu Coin. Fast forward, Frink loses all his money in the process.

In May 2022, the Shiba Inu coin dropped down by 16.5 per cent to $0.00001494, but still, it remained significant crypto. Even though it was an archived scene, it appears that “The Simpsons” rightly predicted the fall. Not only this, the series has mentioned several other cryptocurrencies like Bitcoin, Ethereum and  XRP, all through its episodes  If you don’t know about this cryptocurrency, Investopedia (2022) mentions:

“Shiba Inu is an Ethereum-based altcoin that features the Shiba Inu hunting dog as its mascot. It is widely considered to be an alternative to Dogecoin and is touted as “the Dogecoin killer” by its supporters, a community known as the SHIBArmy. Shiba Inu was created in August 2020 by an individual or group called Ryoshi. Shiba Inu’s price peaked more than tenfold on Oct. 29, 2021, giving it a market capitalization of $41 billion. Even with a steep drop in market cap to today’s $16 billion (as of Feb. 14, 2022), Shiba Inu still ranks in the top ten among all meme cryptocurrencies by this measure.”

5. Tom Hanks Endorses the US, True! 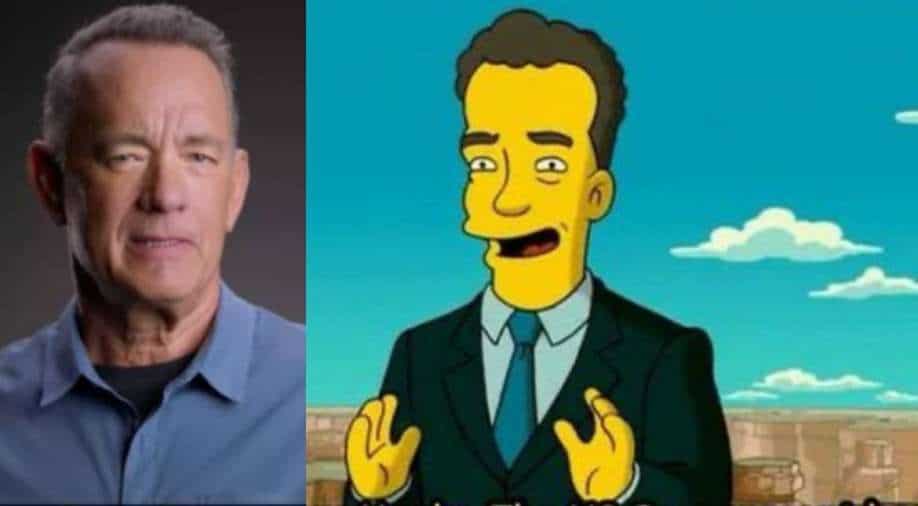 If you’ve watched the 2007 movie, The Simpsons, there is a scene where Tom Hanks makes a cameo appearance in an advert watched by the Simpson family. In the David Silverman-directed film, it’s shown that during the commercial, a father takes his children to visit the Grand Canyon.

However, his daughter gets unimpressed by the old structure and demands a new Grand Canyon. This is when the American cultural icon and multiple-Grammy winner enters the scene. The “Splash” actor says: The US government lost its credibility, so it’s borrowing some of mine.”

JFC… The Simpsons predicted another one pic.twitter.com/qGbjVAJZHn

Well, what he seems to be a sarcastic comment, turned into a reality in 2022 after the one-year presidency term of Joe Biden. Hanks did appear in a commercial and spoke about the country’s determination to overcome economic hardship following the Covid-19 pandemic. The video revolves around “America’s theme of rebuilding its economy and highlighting the successes of Biden’s administration so far.” 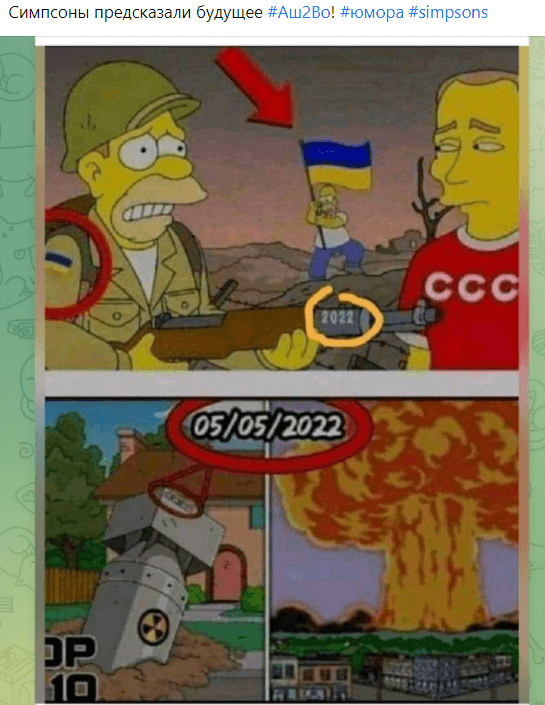 While Russia’s invasion of Ukraine was inevitable, social media users think that “The Simpsons” must be credited for predicting the event in the late 90s. In the episode “The Simpson Tide” (Season 9, Episode 19), which premiered in 1998, a United Nations meeting is featured where representatives of each country meet to discuss their country’s plans. 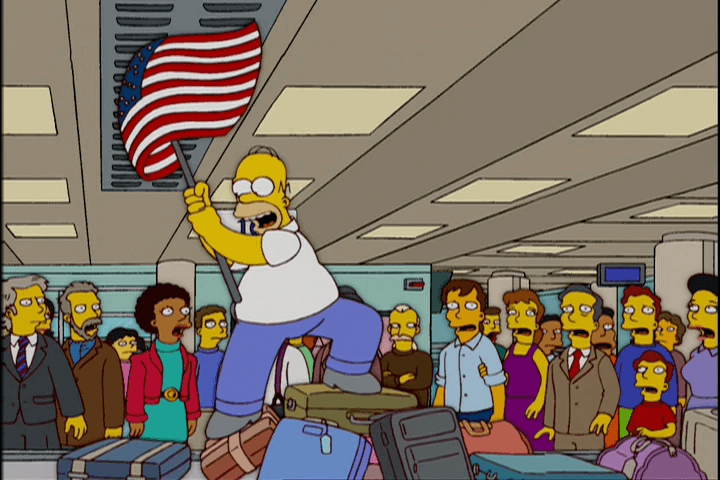 The representatives from Russia argue that they wanted the rest of the world to assume that the Soviet Union was in the past. A scene comes where one can see several soldiers lining beneath the Soviet Union flag. Well, the prediction was instantly termed real when Russia invaded Ukraine in February 2022. However, Matt argued that this prediction was merely based on the everlasting tensions present between the two countries.

Several images regarding the prediction circulated on the internet but they were all edited. Reuters previously debunked this fake claim. Now, if you recall some of the episodes, a soldier named Abraham Simpson (Father of Homer) did not have any Ukrainian symbols on his uniform. But, people claimed that he was a Ukrainian soldier.

As for Homer’s image holding a flag, it was taken from Episode 8, Season 17. FYI, it was an American flag and not a Ukrainian flag as claimed by many fans. Moreover, Putin appeared in a short episode wearing A “Red Sox” t-shirt, not of “USSR”. So yea, there was no such prediction regarding the invasion of Ukraine.

Nevertheless, Russia’s invasion of Ukraine has been one of the deadliest events following which Putin is being disregarded by his own fellow citizens. From imposing draconian laws to shutting down voices, Putin’s government has created havoc for its own citizens. Russian pop icon, Alla Pugacheva expressed support for her comedian husband, Maxim Galkin, who is designated as a “foreign agent” by Russia’s Justice Ministry.

Not only this, but she also asked the authorities to be named a “foreign agent” just like her husband. She narrated how Maxim Galkin, only desired to save the lives of the many Russian soldiers who have been put at the war front for Putin’s “illusionary aims” in Ukraine.

What Is The Secret Behind ‘The Simpsons’ Predictions? In all these years, “The Simpsons” is credited for making some startling predictions, and has become a TV institution in all these years. From predicting the 9/11 attacks; Donald Trump’s presidential election; to the UK lifting a produce restriction, to finding a three-eyed fish, the writers of this series have baffled fans while predicting countless real-life events decades before they took place. So how do they do it? This is one question that continues to haunt our minds.

In last month’s interview, “The Simpsons” showrunner Matt Selman revealed in an interview that the latest season of this series, i.e. Season 34, will reveal to its fans how they accurately predict the future. He said: 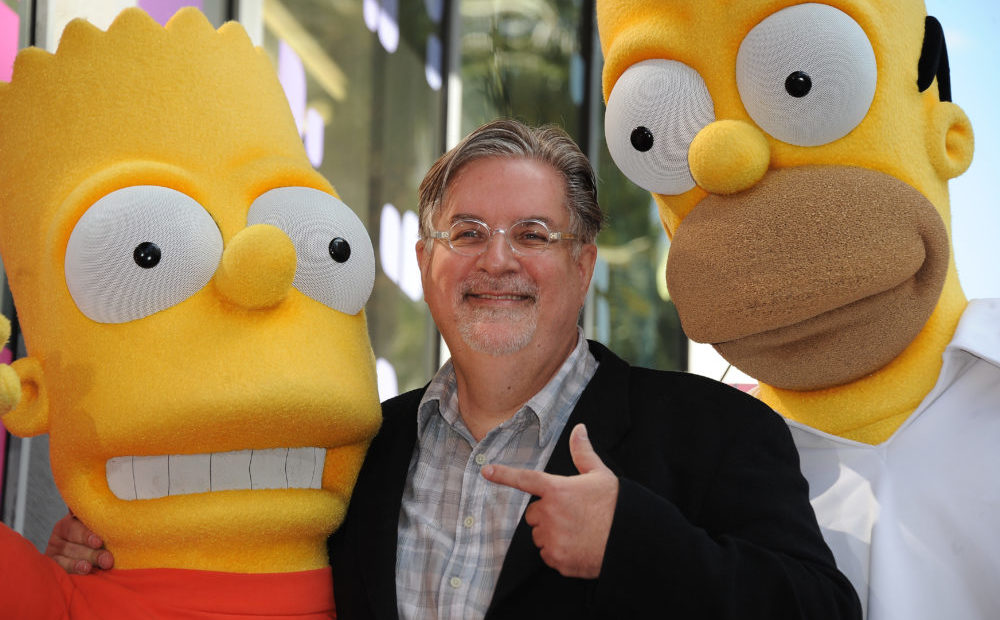 He recalled that one of their writers, who predicted Donald Trump as president, said: ‘If you write 700 episodes, and you don’t predict anything, then you’re pretty bad. If you throw enough darts, you’re going to get some bullseye.”

Well, that surely makes sense. But again, if you want to know the real secret, do not miss any episode of the upcoming season. “The Simpsons” Season 34 is set to premiere on September 25, 2022, and can be viewed on Fox. Btw, did I miss some predictions? Let’s continue this conversation in the comment section.