Rita Moreno, the iconic actress, and singer who can boast of being one of the few EGOT (Emmy, Grammy, Oscar, and Tony) winners, stars in the new comedy ’80 For Brady,’ alongside Lily Tomlin, Sally Field, and Jane Fonda.

Moreno, who rose to fame as Anita in the original film version of West Side Story, appeared on Jimmy Kimmel Live! to promote the film and revealed something that made everyone chuckle.

Beginnings in Life and Career

Rita Moreno was born on December 11, 1931 in Humacao, Puerto Rico as Rosa Dolores Alvero Marcano. Rosa Mara, her mother, was a seamstress, and her father, Francisco José Alvero, was a farmer. Francisco is Moreno’s younger brother. Moreno moved to New York City with her mother when she was a child. She began taking dancing lessons from a Spanish dancer shortly after her arrival.

Moreno began lending her voice to Spanish-language dubs of American films when she was 11 years old. At the age of 13, she made her Broadway debut in “Skydrift,” which drew the attention of Hollywood talent scouts. Moreno lived in Valley Stream, Long Island, at the time.

Read more: How Much Networth Would Be of Matthew Perry After His Book Friends, Lovers, and The Big Terrible Thing?

What Is Rita Moreno’s Net Worth?

Rita Moreno is a multi-talented actress, dancer, and singer with a career spanning more than 70 years. Rita Moreno has a $10 million net worth. 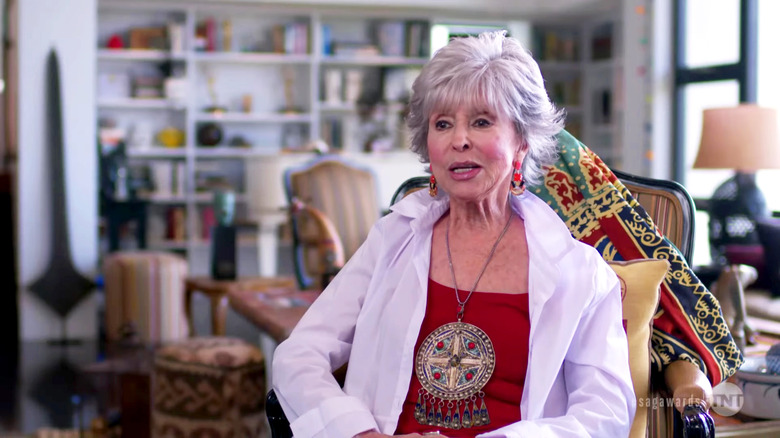 Among her significant credits are “Singin’ in the Rain,” “The King and I,” and “West Side Story,” for which she received an Academy Award for Best Supporting Actress. Moreno is one of just a few persons who have earned the EGOT (Emmy, Grammy, Oscar, and Tony).

A Career in Film Throughout the 1950s, Moreno worked steadily, playing in films such as “The Fabulous Seorita,” “Fort Vengeance,” “Latin Lovers,” “Jivaro,” “Untamed,” “The Vagabond King,” and “The Deerslayer,” among many others. However, she was most unhappy with her roles at the time since she felt she was being typecast in stereotyped Hispanic roles. Her minor role as a Burmese concubine in “The King and I” was an exception.

Moreno’s most well-known performance came in 1961 when she played Anita in the film adaptation of the Broadway musical “West Side Story.” The film went on to win ten Academy Awards, including one for Moreno as Best Supporting Actress.

Following that, she appeared in “Summer and Smoke” and “Cry of Battle,” before going into self-imposed exile from Hollywood. She returned in 1969 with three films: “The Night of the Following Day,” a crime picture starring Marlon Brando, “Popi,” a dramedy starring Alan Arkin, and “Marlowe,” a neo-noir starring James Garner.

Read more: What Is the Net Worth of ‘Street Outlaws’ Star John Odom? Moreno has appeared on Broadway in shows such as “Last of the Red Hot Lovers,” “Gantry,” and “The Ritz.” She earned the Tony Award for Best Featured Actress for the latter. Moreno later appeared in a female version of “The Odd Couple” that was staged in Chicago.

Her Hormones Were Thrown Off by Being in The Changing Room.

“I’d just like to point out that my favorite part in the film takes place in the locker room when the boys are…you know. All of these guys, including Rob Gronkowski, “said the actress.

“I entered into the area, which was a real locker room, and I swear to God, I was turned on in a matter of seconds,” she added. “Are you admitting that a room full of men turned you on for some reason?” Kimmel questioned.

“Not only was I turned on, but I kept grabbing myself! ‘What’s wrong with you?’ I kept asking myself “She burst out laughing. She also stated that she reminded herself that she was in her 90s, but that she eventually convinced herself that “there was nothing wrong with me.”