But this mummy from the Louvre has an intricately woven square design on its face and an overall different wrapping style throughout its body! The intricate décor begs the question, who was this person and why did they get special treatment in their wrapping style?

The Man Behind the Mask

The most striking feature of this mummy, and what sets it apart from others, is the interwoven strips of linen that make up the concentric square design over the mummy’s face. However, underneath the linen the body is remarkably well-preserved. According to the Louvre, x-rays revealed that the mummy was an adult male that lived in the Ptolemaic Period (305 BC to 30 BC). He was wealthy enough in his mortal life to be mummified upon his death which ensured survival into the afterlife. The museum researchers are not sure of the man’s name, but they believe it is either Pachery or Nenu. 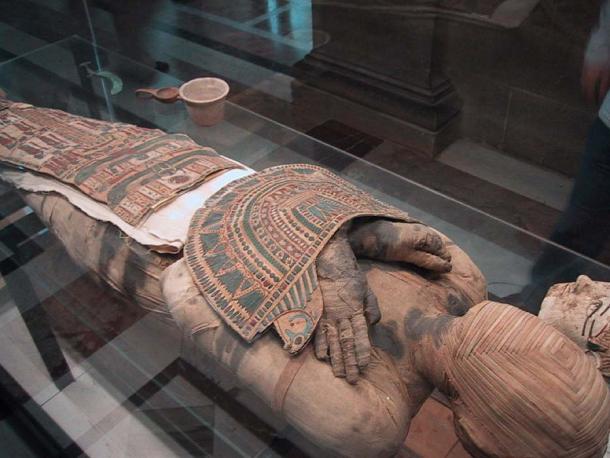 The mummy face has a novel concentric square effect made of strips of linen. ( CC BY-SA 3.0 )

In addition to the geometric twisted square pattern on the face of the mummy. The cartonnage laid over the rest of the mummy’s body features thick shoulders, a neckband draped over the chest, an ornamental apron across the legs, and casing around the feet. Cartonnage is a type of material used in Ancient Egyptian funerary masks and décor from 2181 BC to 400 AD. Similar to papier-mâché, it is made of layers of linen or papyrus covered in plaster then painted.

The Mask and Apron

On top of the square linen design there was a face mask (which now lays beside the mummy) that is decorated with a winged scarab, a symbol of rebirth. The neckband of the mummy portrays the goddesses and sisters Nephthys and Isis, who stand as protectors of the mummy. The neckband is also decorated with several rows of beads and includes falcon-headed clasps. 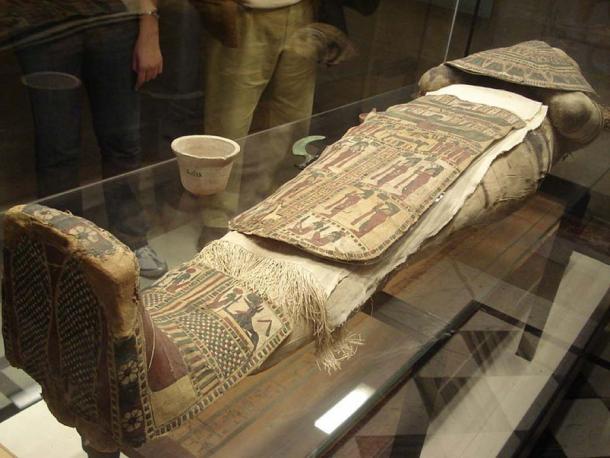 The face mask and apron are decorated with symbolic designs and images. ( CC BY-SA 3.0 )

The apron of the mummy sports various scenes arranged in registers along its length. Most notable of these registers, is a depiction of the mummy laying on a bed surrounded by the goddesses Nephthys and Isis again, along with the four sons of Horus, Imsety, Duamutef, Hapi, and Qebehsenuef. The four sons of Horus are often seen as the personification of the four canopic jars for the liver, stomach, lungs, and intestines respectively.

Along with the mummified body the man’s main organs were preserved in jars, except for the heart and brain. The heart was left outside of the body and the jars because it was thought to embody the soul and therefore needed to be accessible for passing into the realm of the dead. The brain was thought to be the origin of mucus, so it was reduced to liquid, removed with metal hooks, and discarded.

On the foot casings of the mummy are two images of the god Anubis or Anpu, the god of cemeteries and embalming. This god was found on many mummies as he was the one who would weigh the heart of the deceased against the weight of a feather to determine whether the soul would be allowed to pass into the realm of the dead.

Just like today, there were varying practices and associated prices with different mummification processes. Around 450 BC the Greek historian Herodotus wrote a detailed description of these different practices. He described the “most perfect process” as the removal of the brain through the nostrils and other internal organs which were prone to decay. The organs were then placed in canopic jars, as detailed above. The body cavity was then cleaned with palm oil and filled with “the purest bruised myrrh, with cassia, and every other sort of spicery except frankincense.” At the end of the process, the body was wrapped in linen and dipped in resin or gum and given back to the family who would encase it in a wooden case. While all of this was taking place, priests would place many protective amulets among the wrappings. Presumably, this is the type of mummification that Pachery/Nenu would have undergone.

From this man’s elaborate mummification process and wrappings, it is clear that he was a man of wealth. Not everyone in Ancient Egypt was as fortunate as he, many were simply buried in the desert with a few small offerings to the gods. At the inception of the mummification process, the mummies were nowhere near as elaborate as this one. In fact, they were little more than bodies covered in linen and dipped in resin. As time went on the process and wrappings became more sophisticated. Entering into the Greco-Roman period mummies were often remarkable for their highly intricate designs of woven linen as well as their adornments, masks, and cartonnage. During the Ptolemaic Period, all these elements were added to the mummy before it was placed inside of a coffin.