Dwayne Johnson, who recently gave his voice to Superman’s dog in DC League of “Super Pets”, appeared on Jimmy Kimmel Live! and shared some interesting stories – from the tortilla challenge with Kevin Hart, a new home for his mom and being named the master of ceremonies for Shark Week. Also, learn how to deal with a great white shark!

The Tortilla Challenge With Kevin Hart!

Dwyane started by speaking about his eldest daughter, Simone’s debut in the WWE and then revealed the story behind the Tortilla Challenge with Kevin Hart. When asked by Kerry Washington about letting Kevin Hart bring a tortilla on his smackdown on TikTok, The Rock replied, “Yea, we did this tortilla challenge which is a challenge which is pretty popular out there and we did this TikTok challenge, and Kevin slapped the f*** out of me with these tortillas.”

Adding to this story, Dwayne said, “…but like I do it with my little girls, I do it with my little son Kevin, it’s like go ahead, you can hit me, you can do whatever you want.” If you aren’t aware, the tortilla challenge is a TikTok trend which involves two individuals slapping each other across the face with a tortilla while trying not to spit out a mouthful of water.

Johnson posted a video to his Instagram of the two stars doing a “tortilla challenge,” wherein he captioned: “You can tell @KevinHart4Real has been waiting for the day he can finally slap the sh*t out of me with no consequences,” The Rock wrote. Ultimately, Johnson won the challenge but not before Hart was able to slap him twice with a giant tortilla.

Dwayne Gets The Third House For Mom… For Dwayne Johnson, family comes first. The same can be seen on his Instagram, wherein he keeps sharing videos of his adorable daughters and family. About his recent purchase, Kerry stated, “I saw on Instagram, that you recently bought a new house for your mom which is so sweet.” She shockingly asked, “…But hold on–this is the third house you’ve bought her right?

About this, Dwayne replied that years, ago when his goal was to play pro football like Kerry’s husband, “I could never make it but that was my ticket out to buy my parents their first home because we never lived in a home growing up, it was always apartments and trailer parks,” he added.

He continued, “So when we were evicted off the island in Honululu, Hawaii out of our apartment, I told myself that when I was 14 that like I need to buy my own house so I bought them a house and then I bought my parents’ house their first house when I made a little bit of money from NFL.”

Dwayne revealed that when her mom got divorced from his father, he bought her a second house, and “then we moved to the west coast and so this is another house,” he added. However, he added that the other two houses are sold. Dwayne revealed that his mom is his biggest fan and she is the best granny to her three granddaughters.

A Smackdown Room For Dewey Kerry also asked about the fact that Dwayne’s mom has a whole room dedicated to her son in every house. Dwayne gushed and said, “Yea, she has a smackdown room and she wants to bring in every guest in the smackdown room but she insists that I go with her because there is nothing more horrifying than just standing there while– she’s like–and this is Dewey’s (Dwayne’s nickname) room.” The room has every poster, movie, award and accolades he’s earned.

While saying that that’s what all parents do, Dwayne asked Kerry if her parents have something like that, she jokingly replied, “Yea, they do but all they have is a jpeg file, they don’t have like a whole room, maybe because I haven’t bought them a house–I need to buy her more.”

While congratulating Dwayne Johnson after being named the master of the ceremonies for Shark Week, Kerry asked him, “How did you get this job?”. Dwayne revealed that Discovery called and they were interested in him hosting shark week and it was all part of the promotion for “Super Pets”. However, because of “Warner Bros” and “Discovery”, he kept on saying no but could not come up with a reason.

He continued, “I did not want to intimidate the sharks–so I figured out here’s a good way to do it what if we went to Hawaii and sharks are honoured and revered in our–I’m half black and half Samoan and on my Polynesian side, they’re respected and honoured. He revealed that they call the sharks “Amakua”, which are their gods. So he suggested that they connect the culture to shark week.

And that was it, Discovery said yes and so they brought everyone to Hawaii. Yes, the beautiful mind behind this idea was Dwayne, courtesy of his cultural roots. If you don’t know this, Shark Week starts on Discovery Channel on July 24, and Dwayne Johnson is the first master of ceremonies in the 34 years of the TV event. 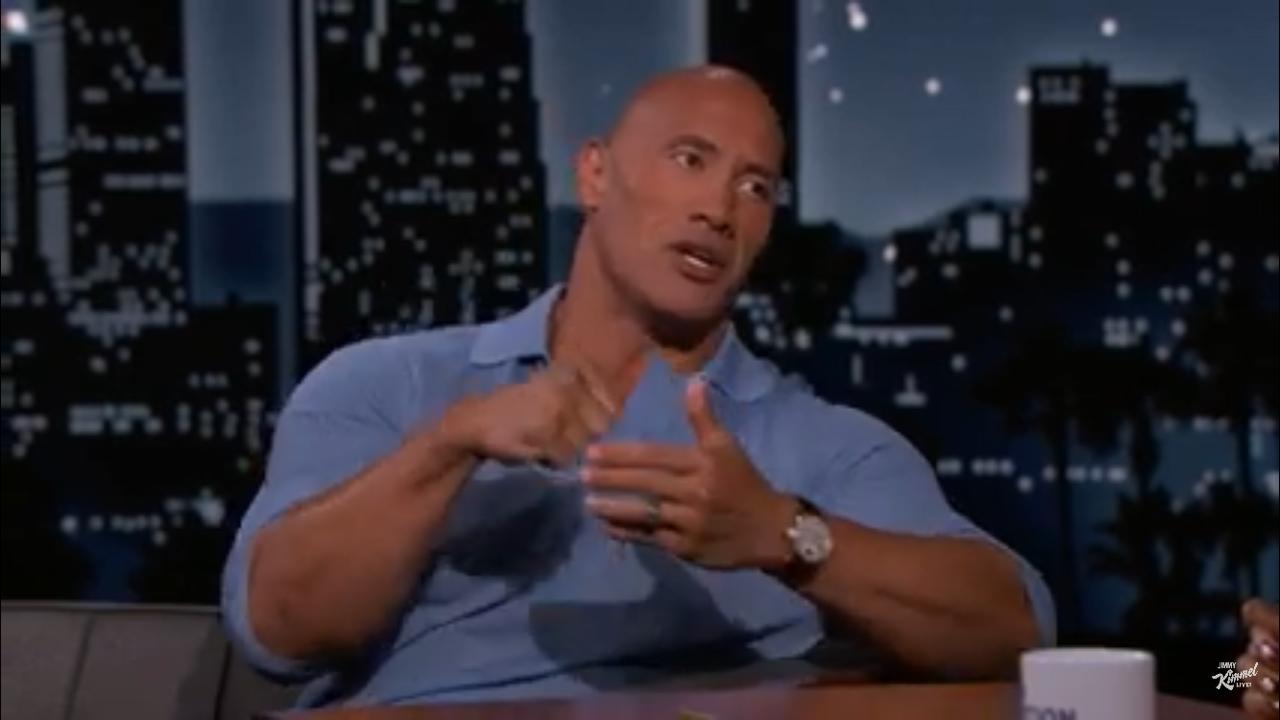 When asked, if Dwayne ever had a shark encounter, Dwayne replied, “I did, I had an encounter one time I was swimming off the coast in Australia and I had a run-in with a great white shark.

Kerry asked, “What did you do?” Dwayne stated that they say either you stay still or if they start to attack you, “you should like–you hear that crazy story about punching sharks right  yea, right in the nose or wherever you can and that’s what I started to do, he added.” Well, I ain’t surprised, it’s The Rock after all. But hey, he does know his thing to get away from danger, eh?