The creators of ‘Dark’ are back with another mind-bending series 1899. This epic period mystery thriller will have the audience thinking twice. In the series, a group of European migrants boards a steamship from London to begin new lives in New York City.

When they come across another migrant ship adrift on the high seas, their route transforms into a nightmare. A nightmare that you can’t escape.

The description of 1899 reads, “When mysterious events change the course of an immigrant ship headed for New York in 1899, a mind-bending riddle unfolds for its bewildered passengers.”

Along with the release date, something else came to light. It’s actually the brand-new trailer that gives us an in-depth look at what to expect. Let’s explore.

‘1899’ Trailer Gives Us A Glimpse At The Mysterious Ship

First and foremost, 1899 will be available on Netflix on November 17, 2022. “The Ship” is the title of the first episode. Netflix penned, “On their journey across the vast and treacherous Atlantic Ocean, the passengers of the Kerberos encounter the biggest mystery of their lives.

Welcome to 1899, a deeply immersive new series from the creators of Dark.”
The trailer starts with a view of the sea and a ship on a journey. “Six hours ago, we received a message,” the main character says. We believe this comes from Prometheus.”

The ship Prometheus has been missing for four months in the deep ocean. People are wondering if the passengers on that ship are still alive after they disappeared four months ago.

Some believe that the ship sank and that this is the only clarification for everyone. The ship is now heading in the direction of Prometheus. People are upset about the caption for the delay.

We even got a glimpse of Prometheus. Nothing makes sense to the passengers, and something is way off the mark with that ship. There are some eerie scenes that inflame the attention of the audience.

We see destruction, rebellion, and a range of other events. “What’s wrong with that ship?” the trailer concludes. Spectators believe Dark was a fantastic show, and they expect 1899 to live up to expectations. Check out the official trailer below.

Odar said, “We do love to play with genres and expectations. I think you have to watch carefully because every little piece means something.”

Friese explained that they have planned this new series to have at least 3 seasons. But it’s upon the audience.

“It’s structured again as a three-season mystery puzzle just like Dark. And obviously, this will only happen if enough people watch, but the way that we approached development and how season 1 is ending, you kind of want to have another one.

So hopefully, ultimately, that is happening. That’s how we laid it out as a plan, and let’s see if the world agrees.”

Friese also remarked to an outlet, “There is a lot in the DNA that is kind of close to Dark in terms of the puzzle and needing an engaged active audience. 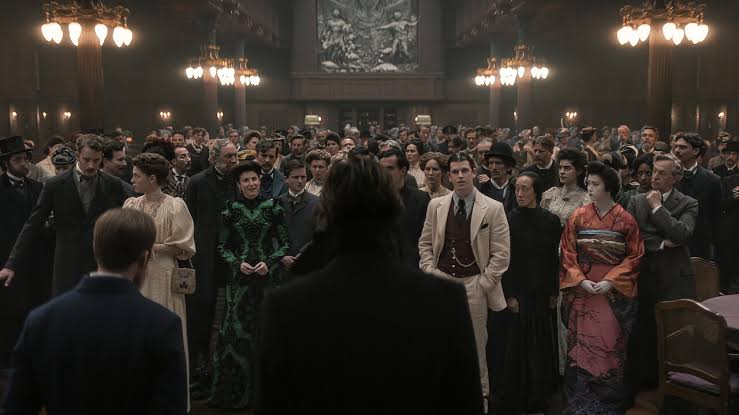 But there are also things that are quite different in terms of atmosphere and tonality, but also pacing and more action-y stuff happening. So it is truly a beast of its own, but shares a lot of the same may be mechanisms as Dark does.

Hopefully, it feels like something really fresh and new, while still [being] exactly what Dark fans would like to watch.”

What are your speculations on this upcoming series? You are welcome to drop your thoughts in the comment section below.