An abandoned mausoleum and silver extraction taking place on an industrial scale at a Roman site in rural Kent has left archaeologists with a 1500-year-old mystery.

Silver extraction on an industrial scale
Archaeologists working on an excavation at Grange Farm, near Gillingham, discovered 15 kilograms of litharge – a material associated with the extraction of silver from other metals. This is the largest amount ever found on a British Roman site and greatly exceeds the amount that archaeologists would normally expect to find on a rural settlement such as that at Grange Farm, suggesting that the refining of silver was taking place on an industrial scale. However, the excavation team did not unearth any signs of the infrastructure that could have supported the size of operation required to produce this amount of material.

The excavation and subsequent research, which was led by Pre-Construct Archaeology (PCA) and involved archaeologists from Newcastle University, revealed a rectangular building that would have been built from timber and divided internally by three aisles. This type of multi-function ‘aisled’ building was fairly common in Roman Britain and would have been used both as a house and a place for crafts.

However, although the archaeologists found evidence of small-scale metalworking at one end of the building, it was not at a level that would have produced the amount of litharge discovered.

The team was confronted with another mystery when they also uncovered a stone mausoleum – a grand funerary monument usually found at Roman villas, not aisled buildings.

Dating to the late 3rd century or early 4th century AD, this was the height of a two-storey building and would have been visible from the nearby river Medway. Inside, the mausoleum had a ‘tesselated’ floor of plain red mosaic tiles which was very unusual for mausoleums in Roman Britain, say the archaeologists.

Inside the ruins of the mausoleum, the archaeologists found a lead-lined coffin containing the body of an elderly lady. Isotopic analysis of the lady’s teeth suggests she was probably local, while radiocarbon dating suggests she was buried around the same time the mausoleum was built. Although it wasn’t unheard of for people to be buried in lead caskets in Roman Britain, it wasn’t a widespread practice. The discovery was also unusual because the team did not find any evidence that the lady had been buried with any personal items or grave goods, which was common at that time.

Dr James Gerrard, Senior Lecturer in Roman Archaeology, said: “There are so many mysteries surrounding the discoveries at Grange Farm. Although we know that the economy during the late Roman empire was based on silver and gold, whose production was heavily controlled by the state, we don’t know why silver was being refined in such huge quantities at Grange Farm – which was only a small rural settlement. It may have been that the site’s proximity to the river was an important factor, or it could have been that the work was being done illegally, out of the Empire’s sight.

“Additionally, we have very few clues as to who the elderly lady was. It’s clear she was someone important with significant status in the community, because to be buried in a lead coffin in a substantial monument like the mausoleum requires resources – both in terms of money and labour.”

Anglo Saxon discoveries
By the fifth and sixth centuries, Grange Farm appears to have fallen out of use as a permanently-occupied settlement, so the team were surprised when the excavation also unearthed a number of early Anglo-Saxon items including two spear heads and ornate brooch. Spears were usually used as part of Anglo-Saxon burial practices but there was no evidence to suggest that Grange Farm was being used either as a settlement or burial site at that time. 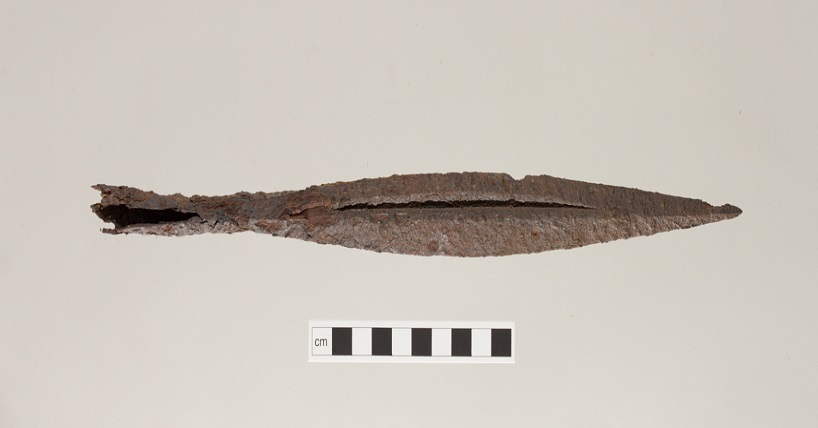 “The brooch is a very unusual find – stylistically it is closer to southern Scandinavia and is one of only a handful of similar brooches found in Britain,” added Dr Gerrard. “Both the spears and brooch are unusual and high-status objects on an otherwise unassuming rural site.

“The mausoleum wasn’t in use at this time, and in fact it appears that the grave of the elderly lady was disturbed in later years – possibly by early medieval graverobbers or relic hunters.”

As well as the litharge and the mysteries surrounding the mausoleum and the elderly lady in the lead-lined coffin, the team of archaeologists also found 453 Roman coins, more than 20,000 fragments of pottery and 8,000 animal bones.

Complex sequence of activity over centuries
The excavation, which took place before the start of a new housing development on the site, is the subject of a new book, ‘By the Medway Marsh’, written by Dr Gerrard, and published by PCA. It details the excavation and the history of the site, from late-Iron Age, its transition and growth under the Romans, and what happened to it during Medieval times.

“The site at Grange Farm has given us a fascinating mystery and an extensive and complex sequence of activity covering the entire Roman period right through to early Anglo-Saxon – and beyond,” added Dr Gerrard. “But that’s just one phase of the story of this place. Everything we found – and what is happening to the site now – is evidence of the economic pull of the Medway and the area’s changing development.”

Victoria Ridgeway, Director and Head of Post-Excavation, Pre-Construct Archaeology, added: “In some ways the excavations at Grange Farm typify much of the work undertaken by commercial archaeological contractors like PCA, in that the sites’ boundaries were determined by the extent of new development, in this case for housing. But, whilst we knew the area had been important during the medieval period, we were less prepared for the extraordinary range of Roman and Anglo-Saxon finds we encountered.

“This book, in common with others in a series of monographs produced by PCA, is the culmination of several years of work, involving many specialists from different fields of research. We are grateful to the support provided by James Gerrard and the department at Newcastle University. This project has provided a welcome opportunity for collaboration between the ‘academic’ and ‘commercial’ aspects of the archaeological world.”